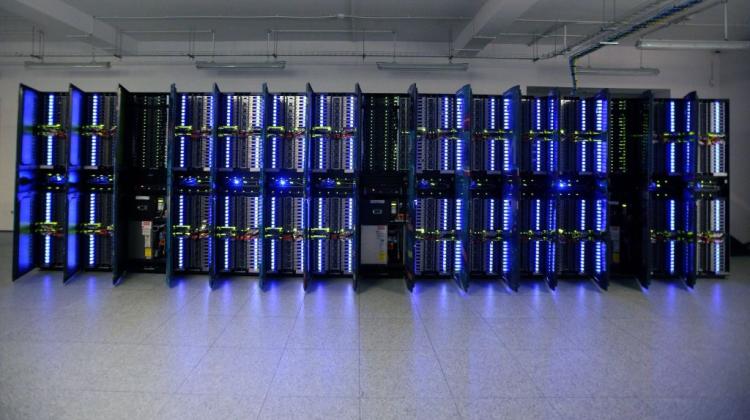 AGH’s Prometheus took a record high, 38th place on the TOP500 list of the world’s powerful computers. This is the highest position of our country in the history of this ranking - University of Science and Technology (AGH) spokesman Bartosz Dembiński told PAP on Tuesday.

The Ranking of the world’s largest computing machines is published twice a year (www.top500.org). The latest edition of the TOP500 list was announced on November 16 at the conference "Supercomputing\'15" in Austin (USA).

Prometheus at the Academic Computer Center Cyfronet AGH is in this ranking for the second time, far ahead of other Polish supercomputers and improving its position from July this year by eleven places. This was possible thanks to its extension with five more cabinets, which increased the power of Prometheus from 1.7 Pflops to nearly 2.4 Pflops.

AGH spokesman added that on the list was also another AGH computer - Zeus, a longtime leader among Polish computing machines. In the ranking are also Polish computers of the Academic Computer Centre in Gdansk, Wrocław Centre for Networking and Supercomputing and the National Centre for Nuclear Research.

For the sixth time, the fastest supercomputer in the world is the Chinese Tianhe-2 (Milky-Way-2), with theoretical performance exceeding 54.9 Pflops.

Prometheus is the fastest supercomputer in Polish history. It was launched in April this year, it is composed of over 2.2 thousand HP Apollo 8000 server connected in super-fast InfiniBand network with a capacity of 56 Gbit/s.

The supercomputer has more than 53 thousand cores (energy-efficient and high-performance Intel Haswell) and 279 TB of DDR4 memory. Connected to Prometheus are two file systems with a total capacity of 10 PB and huge access speed of 180 GB/s. Prometheus is also equipped with 144 Nvidia Tesla GPUs.

"To illustrate the speed of Prometheus you can say that in order to match its cpabilities, you would have to use the power of more than 50 thousand high-end PCs in the most powerful configuration, additionally connected to super-fast network and managed with special software" - said Prof. Kazimierz Wiatr, director of the Academic Computer Center Cyfronet AGH.

He also noted that thanks to the innovative technology of direct liquid cooling, Prometheus is one of the most energy-efficient computers. "Its energy efficiency is on par with the largest data centres in the world, such as Google or Facebook. Furthermore, liquid cooling allows for an extremely high density installation, so the computational part weighing more than 30 tons occupies an area of only 18 square meters and is housed in just 20 racks" - said Wiatr. He added that to achieve the same parameters, Prometheus’ predecessor - Zeus - would need 160 racks.

AGH supercomputers are used to carry out research on predicting the spatial structure of proteins, modern semiconductor nanostructures, calculations related to the analysis of variability of galaxies in a wide range of the electromagnetic spectrum of radiation, simulations of the financial markets complexity.

Kraków supercomputers also benefit international research projects, in which Polish scientists are involved. High-speed Internet network allows to use Prometheus and Zeus to analyse scientific data from experiments. Thanks to specialized software supercomputers analyse large data sets according to given criteria and prepare advanced visualizations.

Only in 2014, Zeus performed nearly 8 million tasks with a total calculation time of nearly 13 thousand years.