Scientists are preparing a map of light-polluted sky 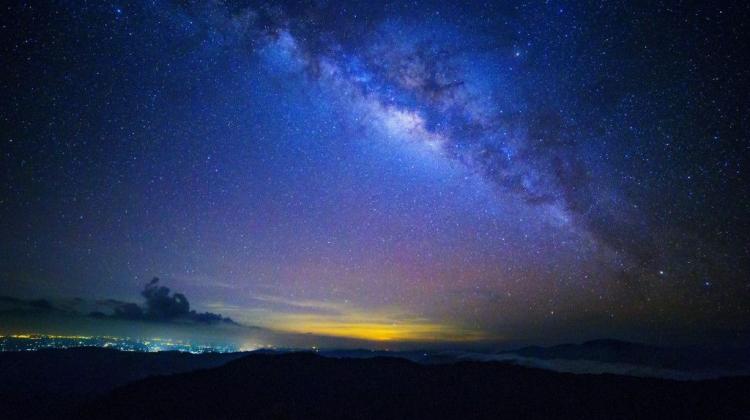 Even 96.8 percent sky over Poland is polluted with light, which may cause sleep, mood and metabolism disorders. With interactive maps that are being prepared at the Space Research Centre PAS, everyone will find out how polluted the sky is above his head.

Light pollution is light emitted in the wrong direction, falling not only on the intended target, like the sidewalk or street, but also on the walls of buildings, trees, lawns. Even 60 percent light from typical bare lamps is sent in the wrong direction. Such light is scattered in the atmosphere and causes the so called urban glow.

For this reason it is often the only celestial body that inhabitants of large cities can see at night is the moon. But that\'s not the only problem caused by light pollution. "Artificial light disrupts the endocrine balance in animals, especially the production of melatonin - a substance responsible for the synchronization of the internal clock. In humans, exposure to night light can lead to sleep and metabolism disorders - as a result obesity, mood disorders - including mania and depression, and even increase the risk of cancer" - explained Andrzej Kotarba from the Space Research Centre PAS.

Light pollution is also a problem for wildlife. Some birds and insects attracted by light become trapped in the "light zone", circling the lamp until they fall of exhaustion. Artificial light interferes with the navigation system and orientation of migrating animals. For other species, lit roads become impassable barriers.

The estimates made using satellite data and computer models suggest that the sky light pollution is present over 18 percent land on Earth, home to 63 percent of the population of our planet. In Europe, up 66 percent of the population lives under the night sky polluted with light. In turn, in Poland 96.8 percent of the sky is polluted with light. "Only the most remote areas are not polluted, farthest away from the cities: the Carpathians and the Sudetes" - Dr. Kotarba told PAP.

"They overestimated the one area where there is light pollution a bit. Currently, it may turn out that dark places in the sky can also be found in north-eastern Poland - noted Dr. Kotarba. On the other hand, in recent decades, Poland +lit up+ as a result of economic development. It may also turn out that even in the Carpathians and the Sudetes it will be difficult to find unpolluted sky."

Scientists from the Space Research Centre intend to examine the current differences in the night sky pollution in Poland. They are also preparing an interactive map and a computer model calculating the brightness of the night sky.

"We will use satellite data from the newer instruments, including the meteorological equipment, as well as the images taken by astronauts on the International Space Station. In addition, we will install at least ten sensors in Poland, which will measure the artificial illumination of the sky. We want to see how these data compare with satellite data and models" - described Dr. Kotarba. The collected information will allow to develop the first ever high resolution map of night light sources in Poland.

Scientists are also preparing a computer model, into which they will feed the collected data to be able to model the spread of this phenomenon and determine the brightness of the sky in every place in Poland. "It will be possible, for example, to see what would happen if we changed street lighting in a selected place. We will see if and to what extent it will translate to the sky light pollution in this place" - explained the researcher.

Another result of the program will be an interactive map of Poland, which will allows anyone to find out how polluted by light his environment is. "Everyone will be able to move the cursor to the place in which he lives and see if the problem of light pollution affects him and with what intensity. Then, people can take the result to the municipal authorities and ask councillors to install less harmful lighting" - noted Dr. Kotarba.

Maps can be used for a variety of scientific purposes. "It will be possible, for example, to develop new maps of migratory routes of animals, taking into account the light pollution factor" - described the researcher. The website with the interactive map will be publicly accessible, and publications on the subject placed in open access.

The project will be completed in five years. The first experimental maps for some cities - including Warsaw, Tri-City, Wrocław, Poznań - should be available in two years. A full map for the entire Poland - in three years. Then the scientists will begin computer modelling.

The project "Light Pollution Sources in Poland - LiPS" is co-financed by the National Science Centre in the programme Sonata Bis.