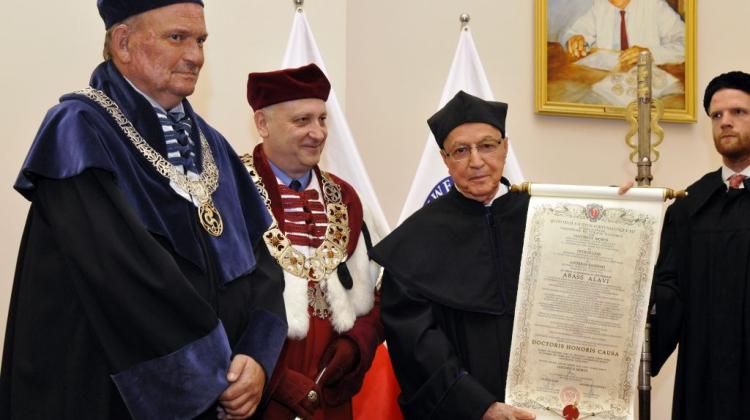 Prof. Abass Alavi, one of the world pioneers of positron emission tomography (PET) - became a doctor honoris causa of the Medical University of Gdańsk. The scientist is widely recognized as the world\'s foremost living specialist in nuclear medicine.

The ceremony of awarding the 47th title of doctor honoris causa of the Medical University of Gdańsk to Prof. Abass Alavi took place on May 13 in the Atheneum Gedanense Novum in Gdańsk.

Rector of the Medical University of Gdańsk, Prof. Janusz Moryś told reporters that "this is a big celebration for the university, especially since the title is awarded to such an incredible person, as Prof. Abass Alavi - creator of positron emission tomography (PET), the test, without which today we can not imagine a proper diagnosis of cancer". He emphasised that Prof. Alavi is probably one of the most "read people in the world, the amount of 45 thousand citations itself shows what a powerful figure he is in the world of science".

According to the Medical University of Gdańsk website, Prof. Alavi is the most cited scientist at the University of Pennsylvania in Philadelphia (UPenn) and one of the most cited scientists in the United States in general. He has authored and co-authored 1,134 publications, the cumulative Impact Factor result is 4.263. His citation index is 45.805.

"It is an honour for us that the professor has agreed to accept this honorary distinction of our university" - emphasised Prof. Moryś. He said that the university has been in contact with the scientist for years. "When the decision was made to create a PET laboratory, employees from Gdańsk travelled to learn this method from the professor" - he explained. He noted that "probably very few centres in Europe can boast that the professor\'s students actively work there and analyse the results of patients".

Rector explained that the Medical University of Gdańsk relations with Prof. Alavi also include scientific cooperation and consultation of difficult cases of patients. "If we have doubts in cases of some patients, the professor is always there to help, advice or even interpret the changes which pose problems for us" - he added.

Prof. Abass Alavi told reporters that being a guest of the university in Gdańsk was a great honour and a great experience. This was the scientist\'s first visit in Gdańsk.

"The professor is a precursor of studies using positron emission tomography (PET), the first person who invented this method and implemented it in practice; it the first time that a patient was given fluorinated glucose, which today is a major marker, used every day in tests of thousands of patients" - explained Grzegorz Romanowicz from the Department of Nuclear Medicine, prof. Alavi\'s student. He emphasised that Prof. Alavi is a very important figure not only in the development of nuclear medicine, but also oncology, because with PET, one of the primary tests in oncological diagnostics and therapy optimisation, the professor saved the lives of many patients around the world.

Prof. Abass Alavi said in Gdańsk that nuclear medicine, and today actually molecular imaging, is becoming a leading technology in medicine. He believes that there is a huge space for the development of nuclear medicine in the diagnosis of diseases, not only cancer. He pointed out that the authorities should be aware that supporting this method not only helps patients through faster and more effective treatment, but also reduces the costs of treatment.

He noted that the first study using this method in a patient was made in 1976, and 1999 the method was validated and approved for routine use in clinical practice by the US. He admitted that at first the obtained images didn\'t tell doctors much and it was a long way to teach and convince them how much this method could contribute to everyday practice. But it worked, and the method found an important place in everyday treatment of not only cancer, but also cardiovascular, inflammation, neurological disorders.

The 78-year-old doctor honoris causa of the Medical University of Gdańsk emphasized that he still had a lot to do, and despite his old age he was trying to teach adepts of the art of medicine the usefulness of this method and give them the strength to develop it further.

Professor Abass Alavi was born in 1938 in Tabriz, Iran. He completed medical studies in Tehran in 1964 and in 1966 he moved to the US. In 1971 he started working at the University of Pennsylvania (UPenn) in Philadelphia, successively in the following positions: Chief of Division of Nuclear Medicine, Co-Director and Medical Director of Positron Emission Tomography Center, Associate Director at the Center for the Study of Aging, and since 2006 Director of Research Education at the Department of Radiology. He is a specialist in internal medicine, oncology and hematology, radiology, nuclear medicine and psychiatry.

In 1973 he and Professors Kuhl and Reivich from UPenn were the first scientists to conceive the idea of labeling deoxyglucose with positron-emitting fluroide leading to the development of FDG, the most important radiotracer used in PET. In August of 1976. Prof. Alavi performed the world\'s first brain imaging using PET with 18F-deoxyglucose. His group has played a pioneering role in FDG imaging of normal brain, as well as dementia, epilepsy, stroke, brain tumours and schizophrenia. He pioneered the studies of neurotransmitters with radioisotopic methods. He made a great contribution to the radioisotope study of inflammation, gastrointestinal diseases, calcification of the arteries of the heart, transplantation of pancreatic islet cells and hyperinsulinism.