GEM simplifies the internal structure of protons and their collisions 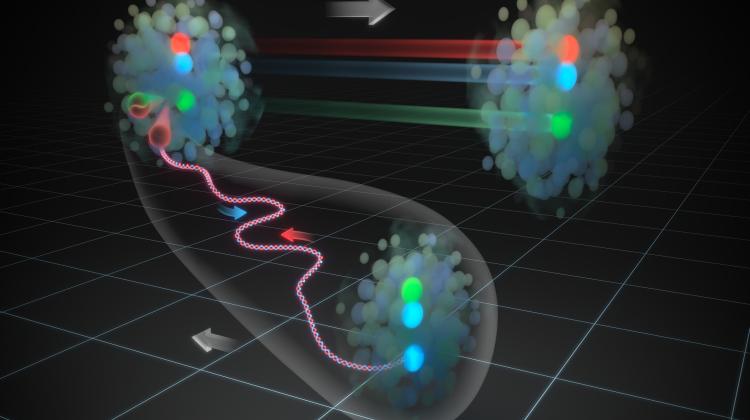 When a proton collides with a proton, the gluon emitted by one of the valence quarks can interact with a virtual quark from the the quark-antiquark pair inside the other proton. According to the GEM model, the result of such an interaction will be a fast proton with an intact structure of valence quarks, and other particles created in processes taking place in the interaction region (outlined in white). (Source: IFJ PAN / Dual Color)

Inside each proton or neutron there are three quarks bound by gluons. Until now, it has often been assumed that two of them form a “stable” pair known as a diquark. It seems, however, that it’s the end of the road for the diquarks in physics. This is one of the conclusions of the new model of proton-proton or proton-nucleus collisions, which takes into account the interactions of gluons with the sea of virtual quarks and antiquarks.

In physics, the emergence of a new theoretical model often augurs badly for old concepts. This is also the case with the description of collisions of protons with protons or atomic nuclei, proposed by scientists from the Institute of Nuclear Physics of the Polish Academy of Sciences (IFJ PAN) in Cracow. In the latest model, a significant role is played by interactions of gluons emitted by one proton with the sea of virtual quarks and antiquarks, appearing and disappearing inside another proton or neutron.

Gluons are carriers of the strong force, one of the four fundamental forces of nature. This binds quarks into composite structures, such as protons or neutrons. In many respects, the strong force differs from the others. For example, it does not weaken, but grows with the distance between the particles. Moreover, unlike photons, gluons carry a specific kind of charge (picturesquely known as colour) and can interact with each other.

The majority of nuclear reactions – including the bulk of collisions of protons with protons or atomic nuclei – are processes in which particles only “brush against” each other by exchanging gluons. Collisions of this type are called soft by physicists and cause them quite some trouble, since the theory describing them is incalculable from first principles. Thus, by necessity, all today's models of soft processes are more or less phenomenological.

“In the beginning, we only wanted to see how the existing tool, known as the Dual Parton Model, handles more precise experimental data on proton-proton and proton-carbon nucleus collisions,” recalls Prof. Marek Jezabek (IFJ PAN). “It rapidly turned out that it was not coping well. So, we decided, on the basis of the old model which has been under development for over four decades, to try to create something which was on the one hand more precise, and on the other – closer to the nature of the described phenomena.”

The Gluon Exchange Model (GEM) built at IFJ PAN is also phenomenological. However, it is not based on analogies to other physical phenomena, but directly on the existence of quarks and gluons and their fundamental properties. Moreover, GEM takes into account the existence in protons and neutrons of not only triplets of the main (valence) quarks, but also the sea of constantly arising and annihilating pairs of virtual quarks and antiquarks. In addition, it takes into account the limitations resulting from the principle of baryon number conservation. In simplified terms, it says that the number of baryons (i.e. protons and neutrons) existing before and after the interaction must remain unchanged. As each quark carries its own baryon number (equal to 1/3), this principle allows to draw more reliable conclusions on what is happening with the quarks and the gluons exchanged between them.

“GEM has allowed us to explore new scenarios of the course of events involving protons and neutrons,” stresses Dr. Andrzej Rybicki (IFJ PAN) and goes into more detail: “Let’s imagine, for example, that in the course of a soft proton-proton collision, one of protons emits a gluon, which hits the other proton – not its valence quark but a quark from the virtual sea that exists for a fraction of a moment. When such a gluon is absorbed, the sea quark and antiquark forming a pair cease to be virtual and materialize into other particles in specific final states. Note that in this scenario new particles are formed despite the fact that the valence quarks of one of the protons have remained untouched.”

The Cracow gluon model leads to interesting insights, two of which are particularly noteworthy. The first concerns the origin of diffractive protons, observed in proton-proton collisions. These are fast protons that come out of the collision site at small angles. Until now, it was believed that they could not be produced by colour change processes and that some other physical mechanism was responsible for their production. Now it turns out that the presence of diffractive protons can be explained by the interaction of the gluon emitted by one proton with the sea quarks of another proton.

Another observation is no less interesting. Earlier, when describing soft collisions, it was assumed that two of the three valence quarks of a proton or a neutron are bound together so that they form a “molecule” called a diquark. The existence of the diquark was a hypothesis that not all physicists would vouch for indiscriminately, but the concept was widely used – something that is now likely to change. The GEM model was confronted with experimental data describing a situation in which a proton collides with a carbon nucleus and interacts with two or more protons/neutrons along the way. It turned out that in order to be consistent with the measurements, under the new model in at least half the cases the disintegration of the diquark must be assumed.

“Thus, there are many indications that the diquark in a proton or neutron is not a strongly bound object. It may be that the diquark exists only effectively, as a random configuration of two quarks forming a so-called colour antitriplet – and whenever it can, it immediately disintegrates,” says Dr. Rybicki.

The Cracow model of gluon exchange explains a wider class of phenomena in a simpler and more coherent way than the existing tools for description of soft collisions. The current results, presented in an article published in Physics Letters B, have interesting implications for matter-antimatter annihilation phenomena, in which an antiproton could annihilate on more than one proton/neutron in the atomic nucleus. Therefore, the authors have already formulated first, preliminary proposals to perform new measurements at CERN with an antiproton beam.