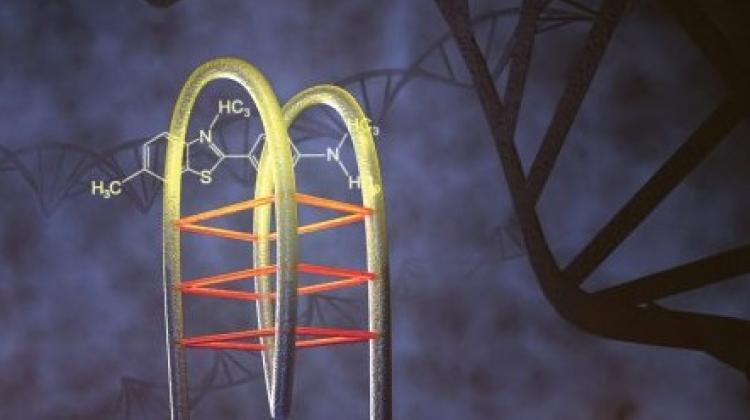 The cover of the JPChL

Physicists from the University of Warsaw have used dye and a laser to detect changes in DNA structures that may cause genetic diseases.

The team from the university’s Ultrafast Processes Laboratory made their breakthrough discovery, which can be used in genetic diagnosis and the early diagnosis of dementia, by examining the effects of light-matter interaction with an organic dye which can then show the structure of DNA at the molecular level.

Dr. Piotr Hańczyc from the university’s Faculty of Physics said: “DNA samples with a specific structure can be synthesized in a laboratory.

“Then they can be dissolved in water and, by mixing the DNA with the organic dye Thioflavin T, the structure of DNA can be examined.

“Thioflavin T is particularly important because it is a medically acceptable marker that reacts with pathogenic proteins and DNA. (...) DNA strands entwine Thioflavin T and, by changing the geometric configuration of the dye, the intensity of the light tells us whether it binds to the DNA helix or to a fragment that may be involved in the generation of diseases.

“This light intensity comes from the amplified spontaneous emission."

The difference between ordinary fluorescence and the phenomenon of amplified spontaneous emission is the large variability of the intensity of light emitted by DNA-bound Thioflavin T.

Dr. Hańczyc said: “In the experiment, the most interesting moment is when the intensity of the sample's glow increases exponentially. By controlling the power of the laser illuminating the sample, we check when the light intensity from Thioflavin T interaction with DNA jumps. This is the so-called emission amplification generation threshold. This threshold is strongly coupled with a specific DNA structure. The threshold tells us about the structure, with which the dye interacts. We find out if the dye binds to a DNA thread with normal structure, or with a potentially pathogenic site.

The work carried out at the Ultrafast Processes Laboratory concerns not only the DNA structure but also the mechanisms of protein aggregation that lead to the formation of toxic aggregates, the so-called amyloids, which are responsible for a number of diseases including neurodegenerative diseases such as Alzheimer's and Parkinson’s.

The physicists from the University of Warsaw are also involved in the work of an international consortium led by the University of Oxford. The Warsaw scientists’ task is to develop early methods of detecting proteins associated with Parkinson's disease. The consortium is working on a vaccine that could block the progression of Parkinson's disease before its symptoms appear.