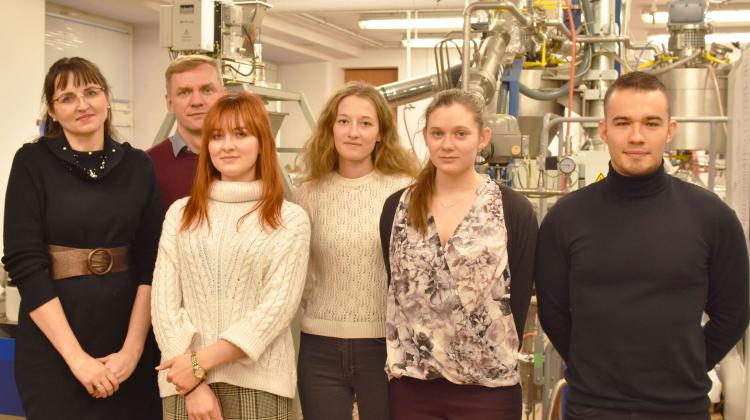 Cancellous bone implants to accelerate bone regeneration and treatment of patients with diseased including osteoporosis have been developed by a team of scientists from the Faculty of Chemistry of the Warsaw University of Technology.

The implants can help not only people, but also find application in veterinary medicine, including the treatment of jumping horses and older dogs.

Project leader Dr. Agnieszka Gadomska-Gajadhur from the Faculty of Chemistry of the Warsaw University of Technology said: "Every orthopaedic surgeon who performs an implantation procedure wants the surgery to be as short as possible, the least invasive, and additionally they would like to use the tools and procedures that they are already very familiar with. We were working on these assumptions.”

Bioactive cancellous bone substitute is the first implant the researchers developed with the goal of reconstructing the cruciate ligament. During the procedure, the surgeon drills into bone channels, damaging the bone to attach the new ligament introduced into the body.

The channels would then be filled with porous implant that resembles a light sponge. The material contains a large number of hollow, interconnected channels serving as a 'scaffold' for cells of the rebuilding bone. Since the material is flexible, growth agents that help in the reconstruction of the natural bone can be deposited on it. One such agent is platelet-rich plasma collected from a patient who receives the implant, which guarantees complete tissue compatibility.

Dr. Gadomska-Gajadhur said: “We thought we would prepare the implant based on a biodegradable polymer, which gradually decomposes in the body. Providing a 'bomb' of pro-regenerative agents, the bone could be rebuilt naturally.”

Due to its flexibility, the implant can be freely cut by the surgeon in the operating room, which distinguishes it from 3D printed implants, which are very stiff and slippery, can not be lengthened or stretched.

A problem orthopaedic surgeons face is the treatment of defects caused by osteoporosis. The disease affects a growing number of women, some of them at a young age. It is estimated that 2.7 million Polish women suffer from it.

Gadomska-Gajadhur said: “We came up with another implant, a bit similar to the commercially used hydroxyapatite bone filler. It is used to fill the spaces with reduced bone density. But our implant with have two components, and mixing will occur inside the bone.”

She added that the procedure will not be invasive, because there is no need to open the bones. The two components containing stem cells from the patient will be administered with a thin needle, usually through the surface of the joint. Inside the bone, in a place where density is low, or cells do not exist at all, the components will mix and form the filler.

Thus strengthened, the bone will not break in this place. In addition, the supplied stem cells will cause a very rapid natural bone reconstruction. After several months, once the stem cells are appropriately differentiated into the patients bone cells, the filling will degrade and be removed from the body. The researcher have already selected a few candidates for both components of the implant.

As a model, the researchers selected wrzosówka (a Polish breed of sheep), unusual for this species due to its black colouring. The goal was to select an animal that grows quite slowly, like a human.

Dr. Agnieszka Gadomska-Gajadhur said: “We are now working on improving both implants to make them possibly non-toxic to cells and perform their function well after implantation. In July of next year, we plan to begin testing on animals.

“This sheep weighs between 50 and 60 kg, which is similar to the weight of a woman. The pressure on the joints, especially the forelegs, where the implant will be used, is directly proportional to that in humans. Over 6 months, the animal gains a few kilograms, so I think that this model will be the best to show how the implant will behave in the body.”

If the results are positive, the team hopes to start clinical trials in humans. The researchers also consider using the implants in veterinary medicine, because various types of mechanical bone injuries are fairly common in animals.

The project topic, cancellous bone regeneration, was commissioned by doctors. It was proposed by an orthopaedic surgeon, Professor Krzysztof Ficek, with whom the scientists from the Warsaw University of Technology collaborate. Currently, cancellous bone defects are repaired with two methods, not always with good results.

The first method, a tissue 'mosaic' grafted from deceased donors, carries the risk of disease transmission from the donor. The material may also be of poor quality, for example when collected from an older person. The second method is to administer a preparation composed mainly of hydroxyapatite. This mineral-organic found in bone and teeth forms a scaffolding responsible for their strength. It is administered to areas where tissue is weakened or disappears.

The price of newly developed implants is expected to be lower than the cost of existing solutions. Compared to EUR 150-200 for tissue 'mosaic', the cost of bioactive cancellous bone substitute should amount to approx. EUR 50. Two-component solution will also be cheaper than the hydroxyapatite graft.

The following researchers are also involved in the BoneReg project 'Porous, biodegradable implants for the regeneration of cancellous bone', financed under the Leader XI programme of the National Centre for Research and Development: Dr. Paweł Ruśkowski, Anna Kołakowska, Krzysztof Kolankowski Aleksandra Bandzerewicz, Joanna Howis and a group of students. Both inventions were awarded medals at the 15th International Warsaw Invention Show IWIS 2021. The team also won the Science and Business Synergy Symbol 2021 award.