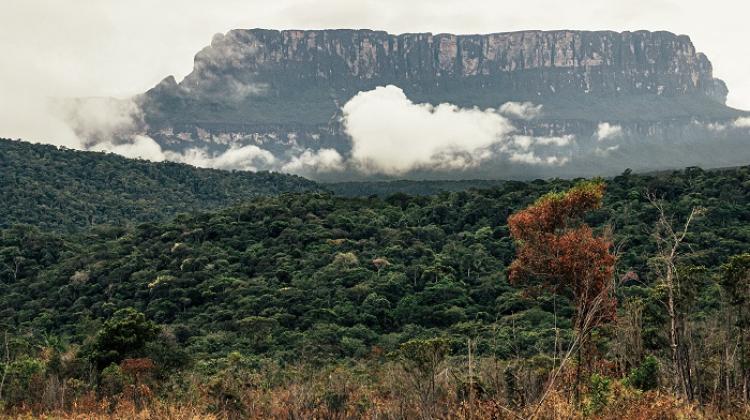 The Guiana Highlands are known for their giant table-top mountains known locally as 'tepui'. The photo shows Aprada-tepui in Venezuela.

The current maps of South America contain repeated errors in the names of several table-top mountains (known locally as 'tepui', 'tipu' or 'tepuy') located around the Guyana-Venezuela border, close to the transection of the so-called Schomburgk Line and the course of Rio Venamo.

The basis for these findings was the January 2019 expedition to Guyana and a subsequent review of recent publications on the Pantepui biogeographic region.

The authors of the discovery, including a Silesian scientist Mateusz Wrazidło, described it in Miscellanea Geographica. In their opinion, these errors have appeared and been repeated due to several factors: a noticeable scarcity of detailed maps of the region, its short history of exploration and ongoing inaccessibility.

Mateusz Wrazidło is a doctoral candidate associated with the Department of Fundamentals of Machinery Design at the Silesian University of Technology in Gliwice. His scientific attention, however, is focused mainly on Pantepui, a biogeographic region in South America known for its numerous table-top mountains, isolated elevations with clearly flattened and extensive tops and steep slopes. These mountains, scattered all over the Guiana Highlands and reaching nearly 3 thousand mamsl, are referred to as 'tepui', which in the native tongue of the Pemon means 'sprouting rocks'.

"For several years, I have been organizing expeditions to the table-top mountains of this region in search of endemic, mountain plants (mainly carnivorous ones)', Wrazidło explains a press release sent to PAP - Science in Poland.

In January 2019, the scientist co-organized one of such expeditions. The goal was to explore the poorly researched tepui Waukauyengtipu in Guyana, near the border with Venezuela. 'It was a second recorded expedition to this tepui in history, after the 1997 expedition of the Smithsonian Institution botanists. I organized the expedition in cooperation with my friends from Georgetown in Guyana, Darrell Carpenay, and members of the indigenous tribal community of Pemón Arecuna from Paruima', says the author of the publication.

Observations made during the expedition in combination with a comprehensive analysis of satellite data and records from previous research expeditions have contributed to the discovery of nomenclature 'confusion' with regard to the local mountains.

'During the analysis of literature sources while writing a report after the expedition, we noticed that many publications confuse the names od the mountains we had visited, and Waukauyengtipu is confused with Cerro Venamo nearly 30 km away, in Venezuela', he says.

The findings of scientists were completely different: the tepui known as Cerro Venamo and Waukauyengtipu should be treated as separate geographical formations.

'What's more, it turned out that Waukauyengtipu was not even included in the official registry of Guyana geographical names or on topographic charts, despite being one of the highest mountain formations in the country', emphasises Mateusz Wrazidło.

'This shows that even today there are places in the world that are real +blank spots+ on maps, where even geographical naming is not entirely formalized', he adds.

Cerro Venamo is a relatively small tepui located near to the western border of Guyana, marked by the course of Rio Venamo and the northwestern end of the so-called Schomburgk Line. Most of its massif is in Venezuela, but and its southwestern slopes are in Guyana.

Past publications are highly inconsistent with regard to the names applied to Cerro Venamo and Waukauyengtipu, the study author notes. He adds that the names of both mountains are incorrectly used interchangeably in many publications and online sources. In addition, the name Waukauyengtipu does not appear in the 'Gazetteer of Guyana', the official directory of place names in Guyana

To this day, some erroneously suggest that that Cerro Venamo and Waukauyengtipu are in fact the same mountain which simply has two different names. 'This is certainly not the case', the study authors write. 'Such an assertion is not precise and might result in the spread of further confusion and inaccuracies in future scientific work focused on the area'.

Other than satellite imagery and other forms of remote sensing data, very few accurate maps of this area exist. Much of the area along the northwestern end of the Guyana-Venezuela border, marked by the so-called Schomburgk Line, remain incompletely explored.

Accorsing tothe experts, exploration of the area is very difficult due to its remoteness and the hazardous nature of the local environment. Wrazidło and his colleagues explain that the area is covered by a cloud forest interspersed with large patches of partially-submerged swamplands, exceptionally challenging to cross on foot and mostly unsuitable for helicopter landings.

'It should be noted that, across the entire region, local communities used distinct, indigenous names to refer to each tepui, including all of the features mentioned in this paper', the authors write. 'The opinion of the local indigenous communities is of the highest significance in this case and respecting the traditional nomenclature serves to preserve and popularize the precious cultural heritage of the entire area of the Guiana Highlands'.

Researchers hope that although many years will likely pass before Waukauyengtipu and Cerro Venamo are fully explored, their finding will help clarify the nomenclature of these interesting plateaus.

To avoid the further spread of confusing information, they believe it is necessary to carry out more detailed geographical surveying work in the area.

The co-authors of the article in Miscellanea Geographica are British geographer Stewart McPherson and Dr H. David Clarke, the leader of 1997 Smithsonian Waukauyengtipu expedition, currently working at the University of North Carolina at Asheville.