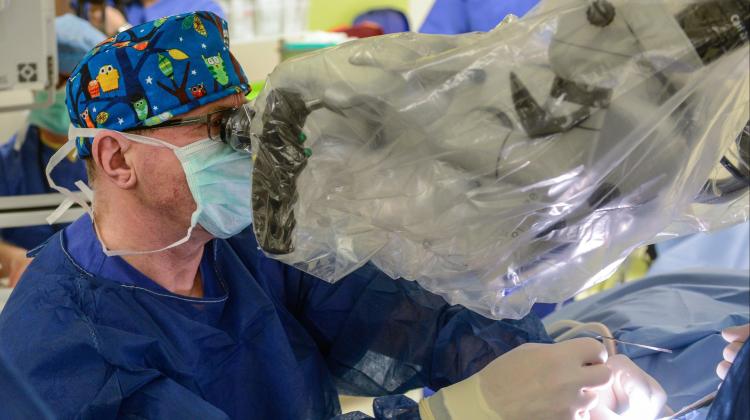 The greatest breakthrough in the use of hearing implants was using them to treat partial hearing loss, says Professor Henryk Skarżyński, director of the Institute of Physiology and Pathology of Hearing in Kajetany near Warsaw. 75% people in the 70-75 age group have hearing problems, many of them suffer from partial hearing loss.

2022 marks several anniversaries of groundbreaking surgeries performed in Poland, at the Institute of Physiology and Pathology of Hearing. 30 years ago, in 1992, the first in Poland implantation of a hearing implant in a deaf patient was carried out. 20 years ago, in 2002, the world's first implantation of such a device in a patient with partial hearing loss took place. Until then, such implants had only been used in cases of very deep or complete hearing loss. Both surgeries were performed by Professor Henryk Skarżyński.

PAP: What was the greatest breakthrough in the use of hearing implants?

Prof. Henryk Skarżyński: The world's first treatment of partial hearing loss in 2002 and its results. The shock was the non-invasive insertion of the implant electrode into the partially (only in the low tones up to 500 Hz) hearing inner ear. That broke well-established views on the theory of hearing. It seemed that certain structures within the inner ear were inaccessible, you could not go in there, open it, let alone introduce something into it, especially an implant electrode that would send out series of electrical micro-pulses that would stimulate nerve endings. And that was another shock. It was accompanied by a deep disbelief that it was possible to achieve such good hearing improvement results. That it was possible to combine the preserved remnants of natural hearing with the hearing obtained as a result of an implant. This tremendous progress is best seen in musically gifted people who had a partial or complete hearing loss before and now they play various instruments.

PAP: Even after this groundbreaking procedure, not everyone believed it.

H.S.: Our patients were invited to the US to re-examine them there to see if they actually achieved such good results. It was an impulse to stimulate various nerve endings, not just auditory ones. This technology, derived from the treatment of hearing impairment, had and still has a chance to become a more universal method for stimulating other organs of senses, including sight, balance and touch.

PAP: Which surgeries were the most important in terms of technical progress?

H.S.: Undoubtedly, implantation of implants into the brainstem. The first such procedure in Poland was carried out in January 1998. These surgeries are rare, but in terms of quality, the results are almost unbelievable. Already in the first patient, we showed her ability to understand Polish and German languages she had known before, and the Italian language she began to learn after the removal of the neoplastic lesions and implantation of the brainstem implant. Ten years later, in 2008, we operated on a patient by implanting two implants into the brainstem. It was also the first such surgery in the world.

PAP: If it is possible to insert one implant into the brainstem, why is adding another one a problem?

H.S.: It only seems that simple. American specialists, mainly in Los Angeles, had worked for 30 years on the program of implantation of stem implants and had never performed such an operation, because they were afraid that double stimulation on both sides of the brainstem, very sensitive nerve structures, could be life threatening.

PAP: How was this achieved?

H.S.: It was the result of cooperation and mutual trust of specialists from Poland, Germany and Austria. We showed that we were starting to cross boundaries in medicine, as well as the boundaries between specialisations for the benefit of patients. From today's point of view, we also showed the freedom of science and the opportunities that it can offer patients. In the following years, we showed several dozen technologies related to otosurgery, which began to be perceived as one of the greatest achievements in Polish science and medicine. What we have done in recent years has become an opportunity not for tens of thousands of people, but for hundreds of millions, especially the elderly. 75% people in the 70-75 age group have hearing problems, many of them suffer from partial hearing loss, not hearing anything from 1.5-2.0kHz. We operate on such patients now. Last year, we had the largest number of hearing implants implanted in the world during the pandemic, with quite a lot of absence of our team members. This is a real 'miracle'. (PAP)