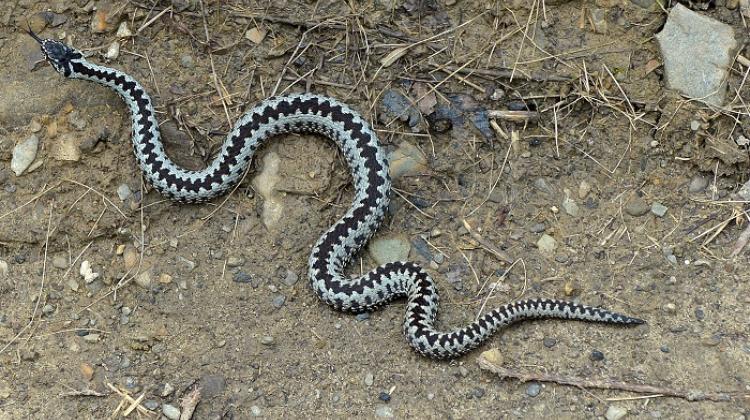 Duszatyn, 02.05.2017. The common European adder (Vipera Berus). The common adder is the only venomous snake in Poland, including the Bieszczady Mountains. (dd/doro) PAP/Darek Delmanowicz

A staggering 21 percent of reptiles in the world are threatened with extinction, a new report in Nature says.

REPTILE EXTINCTION IN THE WORLD

According to the recent publication, 1,829 out of 10,196 reptile species (approx. 21 percent) are at risk of extinction. Crocodiles and turtles are most at risk with 60 and 50 percent of species threatened, respectively.

According to the report’s authors, the reasons for reptile extinction include human activities: loss and fragmentation of habitats related to the intensification and expansion of agriculture, development of cities and transport, deforestation, biological invasion and climate change. In the case of turtles and crocodiles, the causes also include hunting, trade and consumption.

When it comes to protecting reptiles in the world, the most species need saving in warmer climates, especially in tropical forests and islands (for example New Zealand that still has endemic species not found anywhere else). Although the climate of Central Europe is not conducive to numerous reptile populations, it is worth remembering the reptiles still sound in our country.

WHICH REPTILES LIVE IN POLAND?

Herpetologist (a zoologist who studies reptiles and amphibians) Dr. Katarzyna Kurek from the Institute of Nature Conservation of the Polish Academy of Sciences says that in Poland there are 10 naturally occurring species of reptiles, three of which are considered to be threatened. There are five species of snakes in Poland: the Aesculapian snake (critically endangered), the smooth snake (near threatened), the common European adder, the grass snake and the dice snake. We also have 4 species of lizards: the viviparous lizard, the sand lizard, the slow worm and the eastern slow worm. The only turtle naturally occurring in Poland is the European pond turtle (threatened with extinction).

In addition to native species, we also have reptile species that appeared here due to human activity. These include decorative turtles, especially the red-eared slider.

Dr. Kurek said: 'These turtles were easily available, purchased as pets and then released into water bodies throughout the country. These turtles easily adapt to a new environment. Research on the reproduction of this species and functioning in natural conditions is underway.”

She added that red-eared sliders are currently considered an invasive species, saying: “Since 2012, keeping, breeding, reproduction, sale/purchase of this species is possible only after obtaining a permit from the relevant regional director of environmental protection.”

THE STATE OF REPTILE PROTECTION IN POLAND

When it comes to measures for Polish reptiles, Dr. Kurek says that some species require active protection, and therefore active measures that will facilitate the reproduction and survival of these species. Meanwhile, she points out, a lot of such activities are implemented as part of ad hoc, short-term projects, for example by NGOs with EU funds.

She said: “Meanwhile, for the protection to be effective, it is important that such measures are implemented in a stable, permanent manner.”

Scientific research is another important matter. Some preventive protective activities are carried out in the dark, without accurate knowledge about their effectiveness. For example, during road construction, passages for animals are also built. One can guess that they are used not only by amphibians and mammals, but also reptiles, but it is still unknown to what extent. It is also not known how effective the activities are such as the release of young pond turtles into the wild. And whether the released turtles will be able to breed, will sometimes be known only after a few decades (because turtles can live up to 100 years). Sometimes protective measures are introduced before the species completely disappears, but to improve the methods of protecting the dying species, research need to be conducted on a regular basis.

Dr. Kurek says that education is also an important element of animal protection, because reptiles unfortunately still cause irrational anxiety or disgust in some people. That is why the researcher praises the projects carried out even in the Bieszczady Mountains aiming to improve the image of poikilotherms. The goal is to teach people to like the presence Aesculapian snakes and grass snakes.

Kurek said: “And if we understand that they are rare and completely harmless to humans, there will be no mindless killing of these animals.

“An Aesculapian snake or a smooth snake in your garden should be a welcome view.”

As for the common European adder (the only venomous reptile in Poland), Dr. Kurek says that the fear of it is too great in relation to the real danger that it may pose. The researcher explains that in a threat situation adders usually escape, and their bite is not dangerous to a healthy adult.

She said: “Unfortunately, people are so afraid that they sometimes try to kill adders. No wonder that the animal bites when it is fighting for its life. If people knew who to call to quickly take care of a viper in the garden, maybe there would be less cases of killing these animals.

“Global extinction trends also affect reptiles. This is an important group that should also be protected. In order not to lose these species, we should increase the emphasis on educational activities, systematic protection and scientific research on reptiles.”

Currently, everyone can contribute to increasing knowledge about amphibians and reptiles in Poland by reporting information about their observation to the database of the Atlas of Polish Amphibians and Reptiles created by the Institute of Nature Conservation PAS. Data collected by volunteers help scientists better describe, identify and protect the habitats of these dying animals.