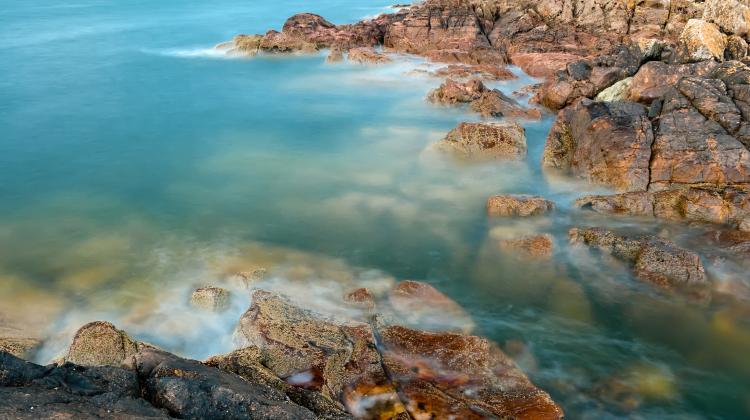 Algae and cyanobacteria in the seas secrete mucous polymer substances that can locally change the properties of sea water, turning it into a non-Newtonian fluid. Many parameters change in this fluid, including the physics of particles falling to the bottom.

Dr. Magdalena Mrokowska from the Institute of Geophysics of the Polish Academy of Sciences investigates this phenomenon in collaboration with Dr. Anna Krztoń-Maziopa and Dr. Maciej Dębowski from the Warsaw University of Technology.

A non-Newtonian fluid often used in experiments in kindergartens or schools is water mixed with potato starch (1:2 or 2:3 ratio). If you apply pressure, the substance changes into a putty and it can be formed into balls. As soon as you stops pressing, it loses its form and begins to resemble a liquid again - it flows between the fingers. In spectacular shows, such a mass is used to fill a pool. You can run on the surface with almost dry foot. However, when someone stands still, the mass sticks their feet and they begins to gradually sink.

The secret of this fluid, one that gives it such unobvious properties, is its variable viscosity. This property changes (non-linearly) depending on even the speed of deformation of the material. In the case of a mixture of starch and water, the faster it is pressed, the more 'dense' it becomes. This is called the shear thickening fluid.

However, there are other non-Newtonian fluids called shear thinning fluids, in which applying certain force causes them to become less viscous and begin to 'flow'. Such fluids include ketchup, shampoo, blood, paint and quicksand. When left alone, they have a high viscosity and seem not very liquid.

However, if we apply strain to them (for example press them quickly or shake them), they become less viscous. This is why in quicksand it is better not to panic and move slowly to avoid sinking deeper and deeper under the surface. And with a bottle of ketchup - you have to shake it to make the sauce flow (holding the bottle at an angle of 45 degrees and hitting it perpendicular to the angle of its inclination does the trick, too).

Sea water, in which certain algae and cyanobacteria species bloom, may become such a shear thinning non-Newtonian fluid under certain conditions. To ensure the desired living conditions, these organisms secrete mucous polymer substances called exopolymers. Extreme amounts of such 'sea snot' (mucilage) occur even in the Sea of Marmara, in the Mediterranean, off the coast of Japan, or in the Bay of Biscay, says Dr Magdalena Mrokowska, a professor at the Institute of Geophysics of the Polish Academy of Sciences.

In her research, Dr. Mrokowska describes how small solid particles - such as dead remains of organisms, inorganic matter, microplastics or so-called sea snow - may fall to the bottom of the sea in the presence of such a mucous.

Understanding the physics of how such particles move in the event of an extreme concentration of exopolymers can be useful to biologists, marine ecologists, oceanologists, climatologists - for example, for more accurate modelling of the circulation of carbon (a building block of organic particles) in nature, or research on microbiological nutritional networks.

Now the researcher and her colleagues - in the model constructed in the laboratory - have looked at how such particles move in a non-Newtonian fluid, which is water with different concentration of salt and exopolymers. Their research was published in Marine Chemistry (https://doi.org/10.1016/j.marchem 2012.104163).

Dr. Mrokowska explains that exopolymers are gels that form a 3D network in water. They can have different structures - they can initially form a colloidal system, then combine into gel microaggregates also containing other organic and mineral matter, and in extreme cases over time they can form several-meter, dense structures observed, for example, in the Adriatic.

“Microorganisms can feel it as if they swim in jelly,” says Dr. Mrokowska. The team's research shows that polymers present in the water can completely change the dynamics of sea particles - both the speed and position in which they fall, compared to what happens in 'ordinary' sea water. In such conditions, micro processes related to the interactions between particles such as aggregation, but also the motor faculties of microorganisms. “The microorganisms can perceive an insignificant, from our point of view, increase in the viscosity, as if they were moving in jelly,” says Dr. Mrokowska.

Changes in the dynamics of particles on a micro scale, in turn, translate into the pace of sedimentation, and consequently into the transport of carbon to the bottom of the seas and oceans along with the falling organic matter, which is important from the point of view of reduction of carbon dioxide in the atmosphere.

For effective study of large-scale processes, it is necessary to know what is happening at the level of individual particles, and in the case of extreme amounts of exopolymers observed in some seas there is still a lot to research in this area. The researcher sums up that the dynamics of falling depends on the concentration of both polymers and salt in the water. For example, it may happen that if the solution is a fairly rare gel colloid, the particles will fall more slowly than when dense aggregates of mucus that can be bypassed are present in the water. The relationships that can be observed here do not have to be obvious.

Dr. Mrokowska says: “The fact that processes in sea water may be subject to non-Newtonian rules is a fairly big change in the approach to the study of well-known phenomena, described in the column of Newtonian sea water.

“To some extent, we can derive knowledge from other fields dealing with non-Newtonian properties of water solutions of exopolymers, but research focused on the conditions in the marine environment is necessary. High concentrations of exopolymers require modifications of standard micro and macroscale models and taking into account new effects such as the impact of viscoelasticity on the position of falling particles.

“I hope that our work will contribute to the development of the methodology of studying non-Newtonian phenomena in the seas in a situation of extreme algae blooms.”

Although algae and cyanobacteria blooms happen also in Poland, it has not yet been shown that water properties change sufficiently to form a non-Newtonian fluid. However, Mrokowska says that in connection with global warming, algae blooms around the world are expected to be more frequent and more intensive. As a result, we can expect more exopolymer gels in the seas.