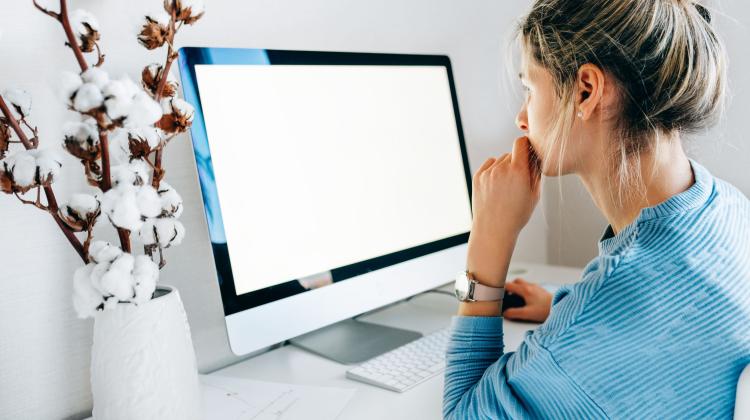 Women, even those in managerial positions, are much more likely to use self-censorship than men. This is due to the fact that they do not believe that their voice can change anything, according to Professor Krystyna Adamska from the University of Gdańsk.

Self-censorship is an individual decision not to talk about issues that are sensitive, difficult or may cause conflict; not to share information about observed irregularities and offences of others. Self-censorship concerns various areas of life, but in the latest study, Professor Krystyna Adamska from the Department of Social Psychology of the University of Gdańsk and her colleagues focused on self-censorship observed in various organizations.

“We decided to investigate whether women were more prone to self-censorship than men, and whether this effect depended on the position they held. We also analysed the influence of procedural justice and the climate in the organization on the level of self-censorship in both sexes,” says Professor Adamska. “The results confirmed our assumptions: women, even those in managerial positions, self-censor more often because they do not believe that their voice can make a difference. However, in favourable conditions, that is in the climate of justice and community, they are willing to speak.”

The scientists published their conclusions in the European Journal of Social Psychology (https://doi.org/10.1002/ejsp.2838).

The author of the publication says that free expression of ideas, views and opinions not only opens the possibility of sharing knowledge, but also constitutes the essence of regulating relations in a democratic society. In all kinds of organizations, giving feedback, pointing to problems and proposing solutions enables development and better cooperation. However, this desirable process often collides with the informal side of social life, where communicative openness may be undesirable from the point of view of the interests of the individual censoring their own statements. This leads to silence of the employees.

There are various reasons for silence. Sometimes self-censorship protects against potential consequences of open communication, but it is often also due to the fact that an employee of an organization simply does not believe in the possibility of change.

“Taught by experience that nobody takes their voice into account anyway, they stop speaking. They become convinced that speaking is pointless,” says Adamska.

“Both the fear of repercussions and the lack of faith in the sense of speaking are based primarily on the experience gained from previous contacts with the supervisor, the HR department and colleagues.”

Does the process of self-censorship take place consciously or not? According to the author of the study, it is difficult to tell unequivocally. “It is a very complex phenomenon, and it concerns various situations that can arise take place in an organization,” she says. She also cites her earlier research on organizational (procedural) justice. It consisted in assessing whether the sense of this justice changed as Poles became an increasingly democratic society. “The results showed that a lot had changed in this regard over the 10 years (2004-2014). People felt different, better, and treated fairly. But note that in this case, people means men. Because not much has changed for women,” she says.

In her opinion, the study perfectly showed that the problem existed. Although we seem to be an increasingly open society, the gender division is alive and well in Poland. “Let me give you an interesting example: I have graduate students of both sexes. When I talk to them about someone else's publications, when they see an English name, they automatically assume the author is a man. They have it imprinted that men do the science.

“And this latest study we're talking about concerns this particular type of self-censorship: an automatic self-censorship. So the act itself happens automatically, we do not consider it, we do not reflect on it, but at the same time we are aware that we are doing it,” Adams says.

As part of the study, the scientists gave the participants the following task: recall various situations in the organization, when you saw irregularities in your immediate environment and did not speak out about it. Then answer the question why you remained silent.

The participants could choose one of the four types of silence: prosocial (I do not say anything because I want peace, and I do not want to harm my colleagues), quiescent (I am afraid of the consequences and getting on my superiors' bad side), opportunistic (I am silent to avoid losing my position and keep what I have) and acquiescent.

Adams says: “Acquiescent silence is not the same as pro-social silence. The latter is about refraining from speaking out in order to maintain positive relationships in the team. But the silence we focused on results from the lack of belief speaking out will change anything, that talking about the problem makes any sense. So I am silent, because there is no point in speaking, because I have tried several times and wanted to change something, but nobody listened to me. So if the system is what it is, I will not tilt at windmills.

“From the very beginning, we expected that in the case of this type of self-censorship, the differences between sexes would be clear. The collected data confirmed this.”

The professor explains that the results confirm the knowledge about socialization processes based on the division of gender roles. “The whole process begins in childhood with the messages we receive from our loved ones,” she says. “Girls are taught to care for relationships; boys are taught that they should fight in a war if necessary. There is a lot of research confirming that women are more relational than men. And of course, this is also due to evolution, because we once had different, strictly defined life goals. But it should not be the case today, because it leads to social inequalities.

“Anyway, our results immediately bring to mind the differences in the position of both genders in our society. I assume that in other societies, for example in Sweden or Denmark, which are very equality-oriented, the situation would be different. But we are a male culture, which means that people of a specific gender are strongly assigned to specific social roles. The opposite are women cultures, where both genders freely exchange these roles. Earlier studies have shown that in international comparisons, Poles are very strongly biased towards the male.”

However, she Adamska adds that the greater propensity of women than men to self-censor does not mean that women have a programmed, imprinted inability. It all depends on the conditions. “Because in the next stage of the study we show that women's approach changes when they know that speaking makes sense,” she says. “When the environment in the organization becomes more favourable, women are even more likely to speak out than men.”

To explain this phenomenon, Professor Adamska recalls a psychological experiment in which children of all ages played with their chosen toys. A whole range of things was available: from typically girlish ones, like dolls, to typically boy's toys, like cars. “When the children were about 2-3 years old, there were no differences in what they would choose. But just two years later, boys played only with boy's toys. Interestingly, the girls were still playing with both types,” Adamska says.

“When I read that study, I thought that this was exactly the case we were studying. Men are more stuck in the roles assigned to them. They are very attached to the image of masculinity that is socially expected from them. They should be tough, not cry, etc. In turn, although women are also pressed into patterns (expected to wear high heels, cook, wash and give birth to children), if the environment is favourable fair, they will exhibit flexibility and, consequently, they will speak more often in important matters,” she adds.

“Unfortunately, being stuck in self-censorship brings more harm than good: it disrupts the exchange of thoughts and knowledge, hinders cooperation, inhibits development. It's like in a family that does not want to raise sensitive topics at the table, for example politics. Seemingly it is better because there are no arguments, the atmosphere during holidays is better. But the longer we avoid difficult topics and hide our views, the more we harm the relationships. Real bonds slowly disappear in such a family,” Adamska says.

That is why it is good to limit self-censorship. This can be done in two ways: formal (based on creating and compliance with procedures) and informal (through a direct influence on the course of the conversation). Both are rooted in two different types of ethics: justice ethics and relationship ethics. “The justice ethics are impartial and free from the influence of current circumstances. Relationship ethics are contextual and emphasize the role of emotions in moral judgments and decisions. In the case of organization, the former is represented by procedural justice, while the latter by interpersonal justice', explains the author of the article. 'We have conducted research separately for formal procedures and the quality of relationships. However, it turned out that both of these factors could complement each other in their impact on self-censorship.”

The study 'Gender perspectives on self‐censorship in organizations: The role of management position, procedural justice and organizational climate' was conducted on a group of over 1,000 people from various organizations and in various positions. It was conducted by a research team composed of: Krystyna Adamska, Natasza Kosakowska-Berezecka, Paweł Jurek and Roman Konarski.