45 bears live in the Polish and Slovak Tatra mountains 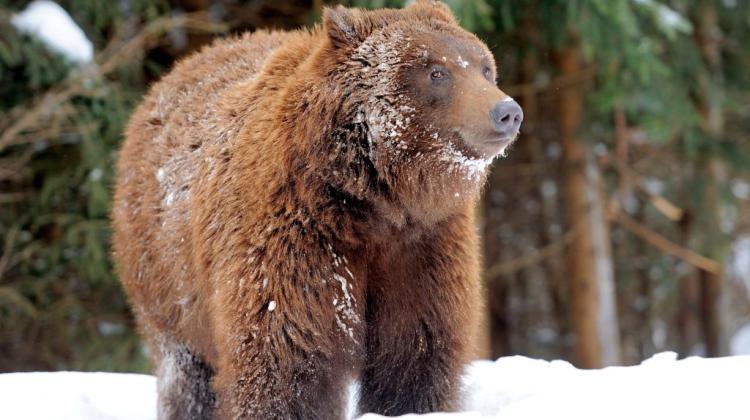 45 brown bears live in the entire Tatras, of which 15 animals are on the Polish side of the mountains, and 16 move seasonally between the two countries, show a detailed genetic studies conducted by researchers from Warsaw University of Life Sciences and the Tatra National Park.

PAP Dr. Zuzanna Nowak of the Department of Genetics and Animal Breeding, Faculty of Animal Sciences SGGW-WULS in Warsaw told PAP that genetic testing of Tatra bears started in 2012, and the analysis was completed this November.

"The results show that not that many bears permanently live in the Polish Tatras. Nevertheless, during the summer, their number doubles, as the bears prefer to be on our side of the mountains during the summer" - said Dr. Nowak.

During the study, naturalists and scientists observed a regularity in seasonal migration of bears: most spend the winter on the Slovak side, and between May and August more bears are on the Polish side. Since the autumn, researchers have observed the return of bears to the Slovak side of the Tatras.

"It is surprising that only some bears, mostly males +specialize+ in destroying beehives. Often a lot of damage on farms is causes by a single animal" - said Dr. Nowak.

According to the researchers, the study population of Tatra bears has a high genetic diversity. "It is a very positive factor, as it means that there is no kin mating, and so bears can +freely+ couple in pairs, and, as research shows, migrate long distances in search of not only food, but also a mate" - concluded Dr. Nowak.

Study of bears began with the collection of their hair, left in the so-called traps. Traps were special patches or wire wrapped around a tree with bait attracting bears. Predator, rubbing against such trap, would leave hair. Additional samples were collected from areas where bears caused damage, mostly from broken hives. Samples were collected over 12 months and subsequently delivered to the laboratory the Department of Genetics.

Bears monitoring program, including genetic research, was funded by the "Milka together for the Tatras" project. "Monitoring of bears is needed, because the more we know about the habits of bears, the better we can protect these animals" - told PAP Filip Zięba of the Tatra National Park, expert on the Tatra fauna.

The largest mainstay of bears in Poland are Bieszczady. Every two years, female bear in a cave gives birth to one to three young, which remain in the care of their mother for a year and a half. Bears are omnivores, adult animals weigh about 300 kg and live up to 50 years