Climatologist: Heat waves kill; the number of victims will increase with warming 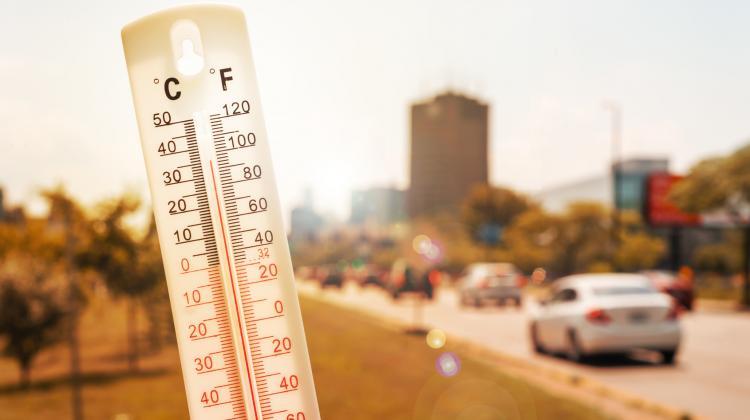 Heat waves are killing many people today, and the number of victims will increase significantly with global warming, says climatologist Prof. Zbigniew Kundzewicz. On the example of cities in Poland and China, the scientist shows how heat waves are reflected in death statistics.

"Climate change is the biggest global threat of the 21st century" - scientists alarm in the prestigious scientific journal Nature Communications. This time, researchers decided to calculate on the example of Chinese cities how individual global warming scenarios will affect population mortality. It primarily concerns deaths related to heat.

"If there is a heat wave in a given year, the effects of lethal harvest can be seen in statistics during and shortly after it" - says co-author of the publication Prof. Zbigniew Kundzewicz from the Institute for Agricultural and Forest Environment of the Polish Academy of Sciences in Poznań. When temperatures are above average, the number of deaths increases compared to days when the heat is not present.

"Heat waves are already killing, also in Poland. This happens selectively. Such additional mortality is observed primarily in groups of older people (65 and above) and people who suffer from circulatory problems" - Prof. Kundzewicz explains. The climatologist adds that societies are aging. "And what is now bad for the elderly will affect a larger group of people in the future" - the researcher comments.

Now Chinese scientists, in cooperation with European researchers, have made predictions for the future of global warming and related deaths. It is expected that due to climate change, the waves of hot days will be more frequent around the world.

"Warming must be controlled. A half degree will make a big difference if we translate it into additional mortality caused by heat waves" - alarms Prof. Kundzewicz. If the average world temperature rises by 2 degrees C, then in Chinese cities alone almost 28,000 more people a year will die compared to a 1.5 degrees increase, according to calculations presented in "Nature Communications".

Last year, scientists from the Institute for Agricultural and Forest Environment PAS published research on the current relationship between heat waves and mortality in the 10 largest Polish cities. They showed that an increase in mortality was clearly visible during the biggest heat waves, comments Prof. Kundzewicz. He adds that in the average year in Poland most people die during winter, and least during summer.

"But this rule does not work if there is a heat wave during the summer, or worse, a series of heat waves. Then the number of deaths peaks in summer" - the climatologist says.

"In 1994, in the 10 largest cities in Poland, there were more than 1,000 additional deaths caused by heat" - the scientist reminds. It was the most tragic year in this respect. He adds that the number of deaths for the whole country is not known "but it is certainly much higher", he says.

The scientist explains that today the number of victims of heat waves exceeds the number of deaths due to hypothermia. "And not by a small margin! In the last 10 years there have been two cold winters; one killed over 200 and the other over 300 people. This is a lot compared to, for example, the flood that killed 55 people in 1997" - he says.

"In the future, the vast majority of weather and climate event-related fatalities in Europe will be associated with heat waves. By the end of the 21st century, it will be up to 99% of such deaths" - the scientist says. He adds that the number of deaths due to hypothermia will decrease.

Citing the report of the European Academies` Science Advisory Council (EASAC), he reports that in Europe (mainly Western Europe) the heat wave in 2003 contributed to the death of over 70,000 people, and in 2010 to the death of 56 thousand people.

Research in China has shown that different cities cope with heat waves differently; in some metropolises the heat is more cumbersome than in others. And this is not only due to climate differences within China. "In some cities, 30 degrees C in summer is normal and people have learned to deal with this heat. Only higher temperatures are a problem. But there are cities where 30 degrees C is so rare that people have not had the chance to adapt to such temperatures and do not cope with them so well" - he says.

He adds that cities can prepare for heat waves. He gives the example of France, where there were so many additional deaths due to the hot weather in 2003, that the Minister of Health resigned. Professor Kundzewicz says that people who died as a result of heat included the elderly, sick and lonely people who, for example, did not feel thirsty. "And in hot weather you have to remember to hydrate! Without water, the body is easily exhausted" - the scientist says. He adds: "France has learned this painful lesson and that is why now in Paris such simple matters as distribution of water and knocking on lonely people`s doors are already a standard". He adds that there must also be air conditioning in nursing homes. "It helps the elderly to adapt to the heat" - the scientist comments.

The climatologist draws attention to the so-called heat island effect - concrete streets, pavements, parking lots, roofs quickly absorb heat and then release it away at night. "The problem in Paris at the time was that temperatures at night would not drop below 25 degrees C. As a result, the elderly were unable to cool down even at night" - he says. That is why - as the scientist explains - it is so important for the city to have green areas. "Parks and gardens prevent the temperature from rising so quickly in a given area" - the researcher concludes.