Prizes & Awards
This text can be copied
Ewelina Krajczyńska 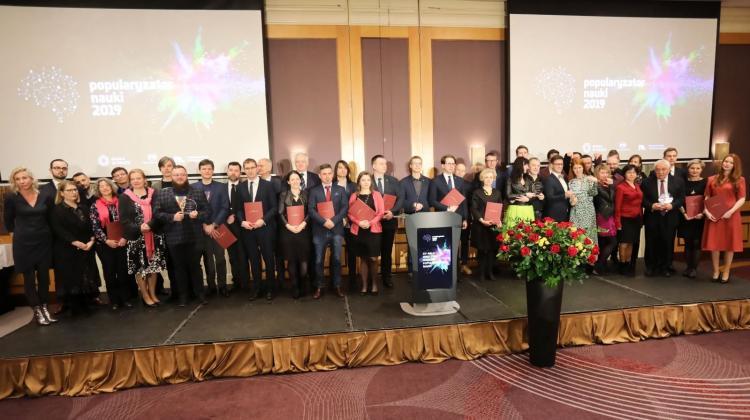 The creators of the Lower Silesian Science Festival, the Crazy Nauka duo, Dawid Myśliwiec, the Association of Science Advocates, Dr. Wojciech Glac, and Heweliusze Nauki are the winners of the Popularizer of Science 2019 competition organized by PAP - Science in Poland and the Ministry of Science.

The results of the 15th edition of the competition were announced on Friday in Warsaw. The ceremony was attended by Deputy Prime Minister, Minister of Science and Higher Education Jarosław Gowin and President of the Polish Press Agency Wojciech Surmacz.

The competition awards people, teams and institutions, whose passion is to talk about science interestingly and reliably. It is organized every year by PAP - Science in Poland and the Ministry of Science and Higher Education.

Addressing the audience, Deputy Prime Minister, Minister of Science and Higher Education Jarosław Gowin said: “There is nothing more noble, more significant for a man than the selfless pursuit of the truth. That is what scientists, thinkers and in a way also artists do (...). In addition to seeking the truth, it is important to promote this truth, bring it to the widest public possible, not only in our society, but also in the community that we, the people, create.”

He noted that the reform of higher education that has been carried out for several years requires effort not only from the scientific community but also from the whole of society. “Spending on science and higher education must systematically grow at a much faster rate than in the last 30 years. Last year, this spending increased by 5 billion, the largest amount after 1989. This year, it will increase by 4 billion, but it is still not enough,” said Gowin.

He added that in order to convince the Polish public that it is worth investing in the development of science, it is necessary to show what scientific discoveries are, and what the immeasurable benefits of scientific research consist in. “This is your great role and great merit,” Gowin told science promoters attending the ceremony.

He also announced that the Ministry of Science would initiate further projects, in which science promoters could take part. “One of the three pillars of the science development strategy adopted by the Ministry of Science four years ago and in this term is the social responsibility of science. (...) As part of the social responsibility of science, in the coming days we will sign another contract with the Copernicus Science Centre to launch the next edition of the Planet Bus and Science Bus programme. We want to ensure that in this term, at least a dozen or several dozen (...) micro science centres are established in Poland: scientific laboratories and scientific exhibitions in cities located far from academic centres,” he said.

The Science Minister also noted that promoting science is extremely important “when through social media, new communication techniques, every message, including a message of falsehood, superstition and manipulation, can reach hundreds of millions, billions of people at once.

“More important is the role of those who are intermediaries between science and the public. The role of such people as those gathered in this room: science promoters, ambassadors of truth who bring the message of science to Polish schools, NGOs, the whole society,” said Gowin .

Chairman of the competition jury Professor Michał Kleiber also emphasised the role of science promoters, saying that today it is impossible to tackle the challenges of dynamic world development without a deep understanding of the achievements of modern science.

He said: “Living in a democratic country, we will not be able to choose those politicians who will be able to make wise, scientifically justified decisions. How do we deal with the problems of energy in today`s world, with environmental protection, with the scope of GMOs permissibility, how do we deal with a whole range of others things that are illegible for +normal+ people in society. (...) That is why it is good that our competition honours those who promote science.”

The Main Prize went to the Lower Silesian Science Festival organized every autumn. Its first edition, initiated by Professor Aleksandra Kubicz, took place in 1998. The main event takes place in Wrocław, and away sessions - in 10 cities of the region. Wrocław universities, institutes of the Polish Academy of Sciences and non-university communities participate in the organization of the event. During the previous 22 editions of the Lower Silesian Science Festival, over 30,000 popular science events reached over 1.5 million recipients.

This year`s winner in the Scientist category was Dr. Wojciech Glac from the Faculty of Biology of the University of Gdańsk. The researcher is a driving force behind the Tri-City Brain Days, during which he gives lectures. This year marks the 10th anniversary of the event, which enjoys unflagging interest.

In the Team category, the award was given to Heweliusze Nauki (Heveliuses of Science). They perform at children`s universities, organise extracurricular activities at schools, present their shows at science festivals. Heweliusze Nauki are not afraid of any topics or fields: lectures on plants, shows about air, fire or sound, archaeological workshops or literature-inspired threads.

The Association of Science Advocates was awarded in the Institution category. Today, this group brings together over 60 researchers with over 300 various science promotion activities since 2016. Their mission is to create a society that bases its decisions on scientific research: it is able to analyse information, and relies on facts and not opinions. Science Advocates also support the art of effective communication, they teach how to engage in a good, substantive conversation.

Aleksandra and Piotr Stanisławscy, the creators of Crazy Nauka (Crazy Science), were awarded in the Media category. The journalist couple have been promoting science for years via the Crazy Nauka blog and Facebook page. In the Homo Science broadcast on TOK FM, the journalistic duo talk with scientists on important and interesting topics. And in the book Fakt, nie mit (`Fact, not myth) they bust pseudoscientific myths.

The jury also decided to award two special mentions. One of them went to Dr. Marta Wrzosek, a mycologist from the Faculty of Biology of the University of Warsaw. She is the co-author of the book W czym grzyby są lepsze od ciebie ("What Fungi Are Better At Than You`). For years, she has been conducting workshops, lectures, meetings on mycology. Her dream is to set up Mycotheque, a special museum dedicated to fungi, as well as the Mycological Centre.

The second special mention was awarded to Jerzy Rafalski. He gives astronomy lectures and shows and prepares astronomy animations. He talks about the mysteries of the cosmos in the media and at science festivals. He is the author of several popular astronomy books.

In addition, the editors of PAP - Science in Poland granted the special Tomasz Trzciński Award for benchmark information policy. The award went to the Press Office of the University of Lodz.

The competition `Popularizer of Science` has been organised since 2005. This year’s edition saw 109 candidates entered. In the first stage of the vote, the jury selected 22 finalists, the best in each of the competition categories: Scientist (7 finalists), Team, Animator, Media (4 finalists in each), and Institution (3 finalists).