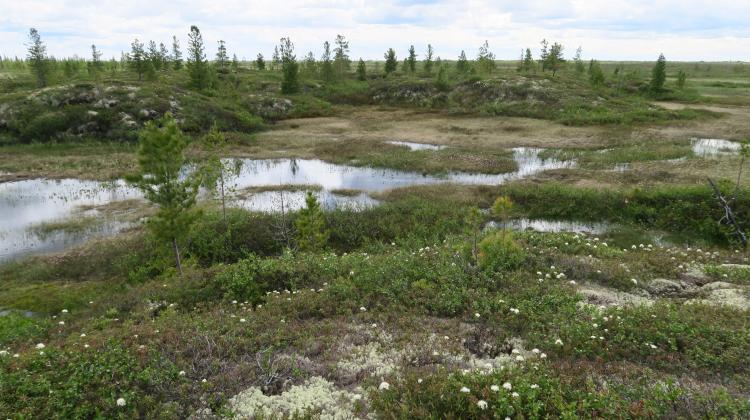 Peatlands are changing from CO2 absorbers to CO2 emitters, releasing 5 to 10 percent of the annual anthropogenic load of greenhouse gas into the atmosphere, says a leading peat bog researcher. And yet they still are not included in climate change models.

Peat bogs and wetlands can have many forms. They can be found on the Polish coast of the Baltic Sea, on the Biebrza River, in icy Siberia, in the Amazon rainforests and in the mountainous regions of Papua New Guinea. Although they cover only 3 percent of the global land area, they contain about 25 percent of the world's soil carbon. This huge carbon stock is not as safe as scientists thought.

Peatlands store large amounts of carbon as a result of the thousands of years of peat accumulation underground, under water saturation conditions. Peat bog researcher Professor Mariusz Lamentowicz from the Adam Mickiewicz University in Poznań said: “Due to human activity peat bogs are changing from carbon absorbers - to its emitters. Between 0.5 and 1 gigatonnes of CO2 are already released from degraded peatlands annually. This is a huge number; it accounts for about 5-10% of the global annual anthropogenic CO2 load that enters the atmosphere', says.

For comparison, Poland's carbon dioxide emissions in 2019 were officially around 0.3 gigatons.

The problem is that peatlands are still not included in Earth System Models (ESMs) used to forecast future climate change. This problem was highlighted in December in Nature Climate Change by an international interdisciplinary team of 69 scientists, including Professor Lamentowicz.

One of the reasons peatlands release more carbon dioxide into the atmosphere is the disastrous peat fires in recent years, during which carbon, accumulated over hundreds or thousands of years in plant tissues, violently goes up in smoke.

Another factor is changing land use. The systems of drainage ditches drain peatlands and render them incapable of holding the stored carbon. Yet another problem is deforestation, which concerns, for example, peat bogs in the Amazonian Forest or Indonesia, drained and transformed into palm oil plantations. These new ways of using land mean that the valuable areas of peat bogs are decreasing.

Another problem is the melting of permafrost covering the bogs (for example in Siberia or northern Canada), which accompanies global warming. As a result, peat, trapped in ice for tens of thousands of years, is flooded with water. If there is too much of it - the bog begins to release a lot of methane, which is a greenhouse gas more aggressive than carbon dioxide.

At the same time, some peatlands are flooded by seas and oceans due to rising water levels. Those areas of peat bogs are washed away and lose their active carbon storage function.

Peatlands do not benefit from rising air temperature and decreasing groundwater levels (conditions for the development of peatlands are getting worse), of from a greater amount of pollution with nitrogen compounds or dust.

Professor Lamentowicz points out, however, that taking measures to protect peatlands allows - at least partially - to make them allies again in the fight against global warming. Such solutions include wetland restoration or projects to block unnecessary drainage ditches.

He said: “Peatlands already release a large load of carbon into the atmosphere, one that has not yet been properly estimated. This should be taken into account in the context of activities aimed at reducing carbon dioxide emissions.”

He added: “Only research based on short-term scientific projects is carried out. At the same time, there is an urgent need to carry out modern research that will show how much carbon is stored in Polish peatlands, and how much is escaping into the atmosphere.

“Peatland science is a critical research area that requires further political and financial support so that we can understand the relationship between peatlands, carbon and climate, also in the social and economic context.”