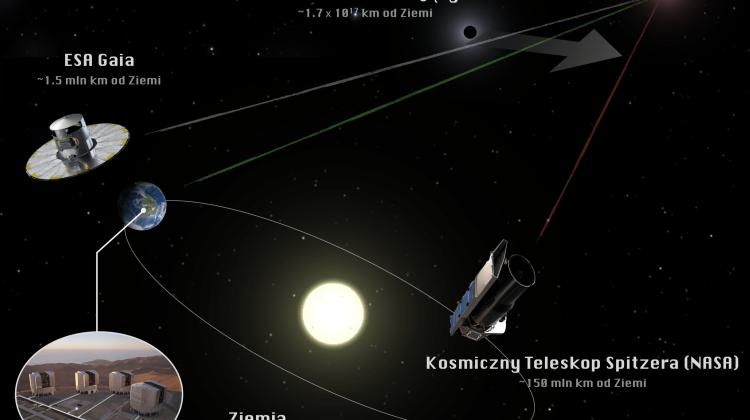 Warsaw astronomers have determined the mass of an invisible object using gravitational microlensing.

Gravitational microlensing takes place when there is an invisible object in the line of sight from Earth to the observed star, causing temporary, distinctive brightening of the star.

Polish scientists are experts in observation and analysis of the gravitational microlensing phenomena (an example is the OGLE project).

A team of international astronomers led by the Astronomical Observatory of the University of Warsaw noticed an unusual brightening of a star in the daily batch of data from the European space mission Gaia on 18 April 2019.

Lead author of the analysis Krzysztof Rybicki said: “We decided to look more closely at this phenomenon called Gaia19bld, counting on a very strong enhancement of the signal in the following days. We pointed terrestrial telescopes on various continents and the Spitzer space telescope at that star.”

Astronomers supposed that it would be possible to register changes in the structure of light sources (star) images in the microlensing phenomenon, which - while well-described theoretically - had not been directly observed before. They predicted the size and width of the maximum of eclipse, and then in consultation with other astronomers (including researchers from the Sorbonne in Paris and the University of Heidelberg) they planned observations on the world's largest telescopes.

Rybicki said: “For the first time we managed to register not only two separate source images, but also the change of their location during the lensing phenomenon. This effect results directly from Einstein's general theory of relativity and was predicted over 30 years ago by Professor Bohdan Paczyński, an eminent Polish astronomer and a graduate of the University of Warsaw.”

The researchers found that the mass of the dark object that served as a gravitational lens has a slightly larger mass than the Sun. If it is an ordinary star, telescopes should be able to see it in a few years when the source and the lens separate in the sky. An alternative possibility is a neutron star or a black hole, but it seems that the lens has too little mass for these scenarios to be true.

The appearance of the source star was observed for almost a year by various instruments, both space telescopes (like ESA's Gaia and NASA's Spitzer), and terrestrial ones, from small robotic telescopes (including those operated by astronomy enthusiasts) to huge 8-meter telescopes of the European Southern Observatory (ESO). Data were also collected by the OGLE project telescope in Chile.

Team leader Professor Łukasz Wyrzykowski said: “This is an excellent example of cooperation between various space agencies, but also between scientists and astronomy enthusiasts. More and more often significant astronomical discoveries are the result of work of many research groups using instruments located in different places. This gives the opportunity to observe phenomena without interruption, because one of the observatories always has the right conditions for observation.”

The research results are presented in three scientific articles in Nature Astronomy and Astronomy & Astrophysics. The work of the Polish research team is financed by grants from the National Science Centre and by the European Commission from the Horizon 2020 programme. (PAP)