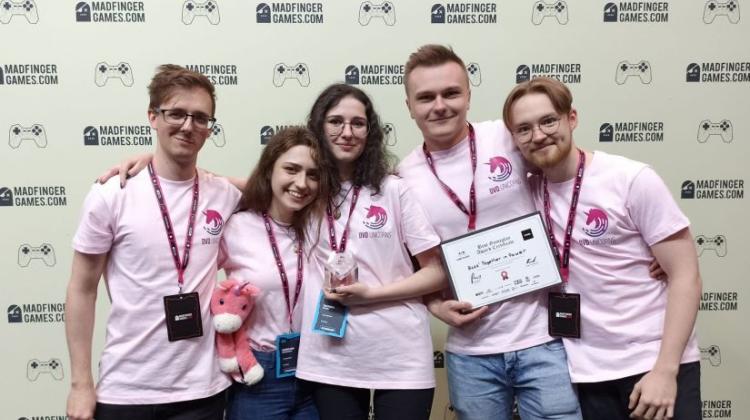 Photo from the Lodz University of Technology press release

Students from Łódź have won Best Gameplay award at the international Game Across Conference in Brno (Czechia).

The DVD Unicorns team from the Łódź University of Technology beat off competition from video industry companies to take first place in the India Showcase competition for their game 'BZZZ! - Together in Power’.

University spokeswoman Dr. Ewa Chojnacka said: “The project of young game creators attracted the interest of jurors and visitors due to the product quality and excellent presentation.

“However, the key to victory was great fun while playing +BZZZ! - Together in Power+. Many players would return with their friends to the students' stand to play again.”

According to the team's 3D graphics designer Filip Izydorczyk, the video game industry is specific in that a good idea counts more than a large budget.

He said: “Thanks to this, even student projects, such as ours, have a chance to compete with commercial games.”

Mateusz Majchrzak, responsible for level design, added: “In our team, everyone brings slightly different competences to the table. By combining different skills, experiences and ideas, we could create a game that was great fun even for the youngest players.”

The team’s previous projects have won, among other awards, the National Competition of Team Development of Computer Games.