Polish engineers to help bring samples from Mars to Earth 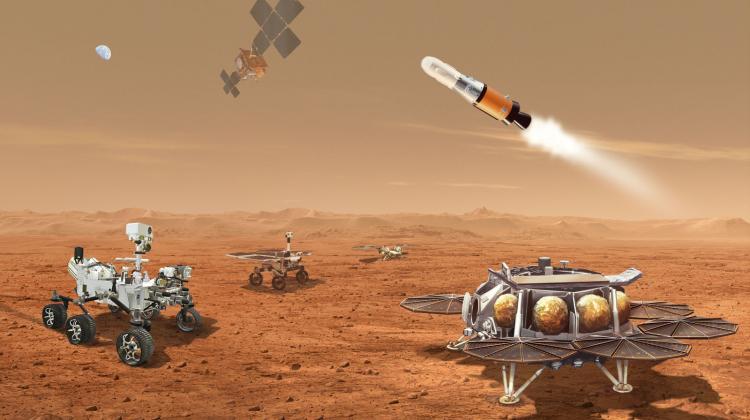 Samples collected by the Perseverance rover on the surface of Mars are expected to reach Earth in 2031 after Polish engineers develop a chassis prototype for a rover responsible for collecting and transporting the samples.

Engineers from the Polish company PIAP Space are working on the chassis prototype for the Sample Fetch Rover (SFR) in an international consortium with Airbus (the main contractor of the project) and MDA. The project is financed by the European Space Agency (ESA).

The SFR will play a key role in Mars Sample Return (2020-2030), a joint project of NASA and ESA. Its primary goal is to transport to Earth the research materials collected during the last years of Mars exploration.

The first stage of this project began spectacularly and is still ongoing. In 2021, Perseverance rover landed in the Jezero Crater on Mars. It obtains samples from geologically interesting places on the Red Planet. The materials will be stored in 43 cylindrical tubes and left on the planet's surface for collection at a later point.

In the second phase of the programme, which will begin in 2026, a rocket with a lander and the Sample Fetch Rover on board will travel to Mars to recover the samples. The rover will perform its task with a robotic arm and place the materials in a container on the Mars Ascent Vehicle (MAV). The MAV will transport the samples to Earth for detailed analyses.

Work on the SFR chassis prototype was carried out in 2020-2021. PIAP Space was responsible for the executive design, production, technological improvements and preliminary tests of the SFR chassis. Canadian company MDA created software, 3D design and electrical diagrams of the chassis, and the Swiss RUAG was responsible for system engineering and supervised the device validation.

One of the most difficult tasks for Polish engineers when designing the device was to deal with the Martian dust. “All movable parts, engines, mechanisms must be sealed, because Martian dust has a 10 times smaller diameter than sand on Earth. It gets everywhere,” Mateusz Wolski, CEO of PIAP Space told PAP.

In November 2021, the prototype device was delivered to RUAG’s headquarters in Switzerland, where its traction capability is being tested. Further components of the rover's equipment, which will ultimately weigh about 100 kg, are being assembled in the UK. In autumn, the rover will be tested in a simulated Martian environment in Stevenage, UK.

Wolski said: “If these tests are successful, the next step will be to develop an engineering model, then the qualification model and a flight model. At each stage of tests, corrections and improvements are introduced to ensure that the final device is reliable. In the next stages we are a bidder. The decision as to who will build the final device is ahead of us.”

He added that due to the prestige of the mission and to minimize the risk of failure, NASA and ESA adopted the methodology of building subsequent prototypes.

He said: “We are at the beginning of a path. We hope that the solutions implemented in the device will become the basis for building the target Mars rover, which will be necessary to bring samples from Mars to Earth.”

In the final stage of the Mars Sample Return programme, ESA’s Earth Return Orbiter will launch on an Ariane 6 rocket in October 2026. It will reach Mars in 2027 using ion propulsion and a separate propulsion element to gradually lower its orbit to a proper low Martian orbit by July 2028. it will capture the MAV in low orbit and transport the samples to Earth. The capsule will return to Earth in 2031 during the Mars-to-Earth transfer window.