We eat up to five grams of microplastics every week 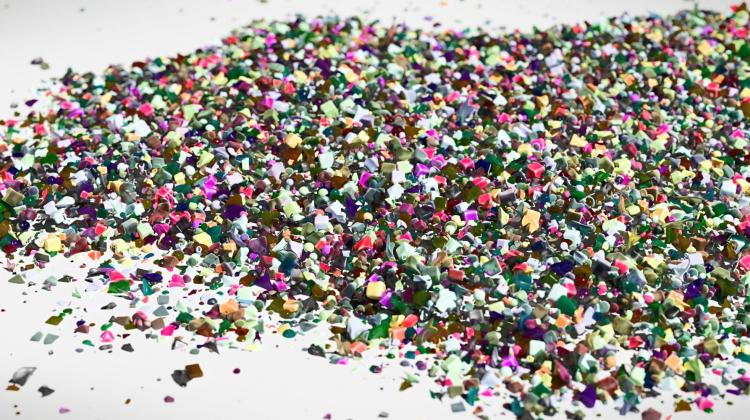 Although microplastics are ubiquitous in food and we unknowingly eat up to 5 g of them every week, there are still no estimates on a safe dose for the body.

However, an enemy even more difficult to overcome and study is looming on the horizon: nanoplastics.

Food testing specialist Dr. Małgorzata Grembecka from the Department of Bromatology of the Medical University of Gdańsk said: “First, we contaminate the environment with artificial plastics, and then they contaminate us. For our own good, we should reduce plastic consumption.”

In her publication in Critical Reviews in Food Science and Nutrition, the researcher and her team analysed the literature on microplastics and checked what was already known about the harmfulness of these materials, and what was not.

Dr hab. Małgorzata Grembecka says that microplastics, i.e. particles of plastic with sizes of 0.1-5000 micrometers - are found on human skin, hair, saliva, in the lungs, in faeces, but also in the blood. This material not only gets into our digestive tract, it can also penetrate the intestinal barrier. It is also disturbing that microplastics were found in meconium (the earliest stool of an infant). And that could mean that microplastics can even cross the blood-placental barrier.

Dr. Grembecka said: “We are not only contaminated with microplastics ourselves, but we also transfer this contamination to future generations.”

The harmful effects of microplastics on the body can be twofold. Firstly, due to the composition. We know that some monomers - the polymer bricks of plastics - have a toxic effect on the human body. This is the case with units that form polyvinyl chloride, polystyrene or epoxy resins. Another problem is that plastics also include various plasticizers and substances that are added to it during production, for example endocrine disrupting compounds.

Another adverse action of microplastics is that other contaminants can accumulate on their surface. This material can therefore transport bacteria, fungi and pathogens into the body - including drug-resistant ones. Microplastics can also carry substances that are a threat to us, for example polychlorinated biphenyls, bisphenol or pesticides.

Dr. Grembecka said: “When it comes to the effects of microplastics on health, a lot depends on where in our body they end up, in what amounts and what their composition is. Based on what we already know, we can say that they can cause developmental disorders and fertility problems, they can also be neurotoxic, immunotoxic, as well as genotoxic and cytotoxic. We also know that the presence of microplastics increases oxidative stress.”

Studies on microplastic toxicity have already been conducted on fish, mice and sheep. Grembecka continued: “But we are only at the beginning of research on the toxicity of microplastics. There is no estimation of what a safe dose of microplastics is. And we eat between 0.1 and 5 g of this type of particles per week.

“We need an evaluation that will allow to estimate the actual scale of the problem associated with this pollution. Research will definitely go towards developing methods of analysing the content of microplastics in food, but also methods of estimating human health risk and evaluating the toxicity of various microparticles - based on their sizes, shapes or potential of passing through the mucous membranes of the intestines.”

Another problem that is coming to light is nanoplastics - even smaller plastic particles (with sizes from 1 to 100 nm). Due to their size and surface, they are characterized by even greater toxicity than microplastics, because they can penetrate tissues. Their presence may result in inflammation and oxidative stress. In addition, they can adversely affect fertility and are more neurotoxic. Grembecka said: “However, due to the size of these particles, the study of their presence - even in foods - is very complicated and this process is just beginning.”

When asked which products we should avoid due to microplastics, she said: 'That is the problem, we do not yet know. While in the case of, for example, heavy metals, we can predict in which products they can be found and reduce the risk associated with their consumption, there is no such information about microplastics. Microplastics are not only ubiquitous in food, but we do not yet know how to determine their content in food.”

When asked if she has any advice for people who would like to reduce the consumption of microplastics, the bromatologist said: “Try to avoid plastic-packed products, especially fruit and vegetables. Meats should be wrapped in paper, not plastic film. We know that avoiding plastic is not always possible. But wherever you can - try to minimize the amount of plastics in life.”