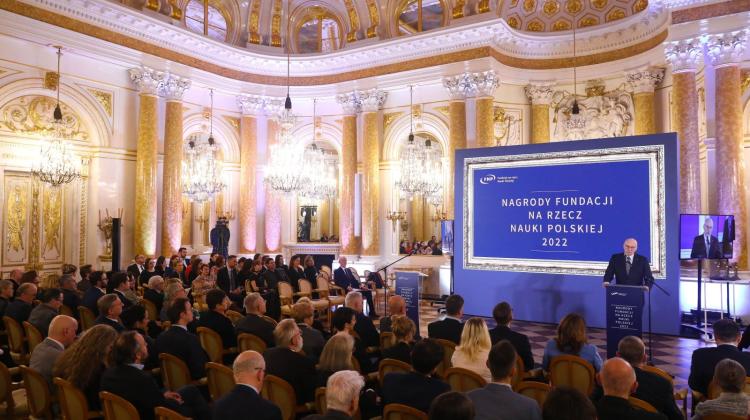 07.12.2022. Representative of the Executive Board of the Foundation for Polish Science Professor Maciej Żylicz (R) during the 2022 FNP Prize Ceremony at the Royal Castle in Warsaw. PAP/Tomasz Gzell

Professors Marcin Nowotny, Bartosz Grzybowski and Adam Łajtar have received the 2022 Foundation for Polish Science Prizes. The 2022 FNP Prize Ceremony was held at the Royal Castle in Warsaw.

The FNP Prize honours outstanding achievements and scientific discoveries that 'push the boundaries of cognition and open new research perspectives, provide an exceptional contribution to Poland's civilizational and cultural advancement' and assure the country's significant position for undertaking the most ambitious challenges of the modern world. The FNP Prizes were awarded for the 31st time. Each of the winners will receive PLN 200,000.

The FNP Prize enjoys the reputation of the most important scientific distinction in Poland. The prizes are awarded by the Council of the Foundation for Polish Science by way of competition in four areas: life and earth sciences; chemistry and materials sciences; mathematical, physical, and engineering sciences and humanities and social sciences. No prize was awarded this year in the field of mathematical, physical and engineering sciences.

Professor Marcin Nowotny from the International Institute of Molecular and Cell Biology in Warsaw, Poland, received the 2022 FNP Prize in the area of life and earth sciences for the explanation of the molecular mechanisms of DNA damage recognition and its repair. The researcher has described the structure, characterized the function, and explained the mechanism of several proteins and protein complexes key in cell biology, which interact with nucleic acids and participate in DNA repair. The results of his work have been described in several highly cited scientific journals.

“I would like to thank the Foundation for this award. For years I have admired the people who receive it, so it is a great distinction and honour for me to join this amazing group,” Professor Nowotny said during the ceremony.

One of the reasons why his return to Poland and the development of his career here were possible was - as he pointed out - the existence of the International Institute of Molecular and Cell Biology in Warsaw. I think it is a really amazing place to work. This is because we all share a similar hierarchy of values at the institute. This hierarchy of values puts the quality of scientific research in the first place,” he said.

Professor Bartosz Grzybowski from the Institute of Organic Chemistry of the Polish Academy of Sciences in Warsaw and the Ulsan National Institute of Science and Technology, Ulsan, Republic of Korea, received the 2022 FNP Prize in the area of chemistry and materials sciences for the development and empirical verification of an algorithmic methodology for planning chemical synthesis. Grzybowski created the Chematica and Allchemy software based on network theory, artificial intelligence, deep learning, and elements of quantum chemistry. These two programmes collect and learn a myriad of chemical reaction types and their relationships to find optimal pathways for synthesizing desired compounds.

With access to catalogues of chemical compound companies, these algorithms can identify viable and economical pathways for the synthesis of arbitrary complex targets from cheap and readily available substrates. The programmes can also identify solutions that 'circumvent' existing patents for previously synthesized molecules.

Professor Bartosz Grzybowski admitted that he had been living outside Poland for many years and conducted research there, but only when he established a research group in Poland he found people who were able to creatively develop his research. He said: “I am very grateful to my group, to whom I dedicate this award.”

The third winner, Professor Adam Łajtar from the Faculty of Archaeology at the University of Warsaw, Poland, received the 2022 FNP Prize in the area of humanities and social sciences for the interpretation of epigraphic sources explaining the religious-cultural functioning of medieval communities living in the Nile Valley. His achievement consists of documenting, editing, and interpreting linguistically, religiously, socially, and culturally nearly a thousand inscriptions found on the walls of the so-called Upper Church in Banganarti (North Sudan), discovered nearly twenty years ago by Polish archaeologists. The Banganarti inscriptions are a wonderful testimony to the literary culture and spiritual life of the people of Christian Nubia in the Nile Valley, on the border between Egypt and Sudan, while the information they contain about the authors provides fantastic information for reconstructing their social life.

Professor Łajtar said: “I hope that representatives of my discipline will benefit from this work and other papers on the epigraphy of Christian Nubia, but also that my work will affect the historical awareness of the broader public.”

Professor Maciej Żylicz, President of the Executive Board of the Foundation for Polish Science, noted during the ceremony that “the Foundation supports good science. Regardless of whether it is basic or applied research.” He added: “We have some fighting between these two tribes, but it is completely unnecessary. Every good science has some consequences for society - be it in an economic or another social dimension (...) that is not important. What matters is that they have social consequences. This is the credo of the Foundation's operation.”

Candidates for the FNP Prize may be nominated by distinguished scientists personally invited by the Foundation's Executive Board and Council. The FNP Council serves as the competition committee and selects the winners based on opinions from independent experts and reviewers - mainly from abroad - who assess the candidates' achievements.