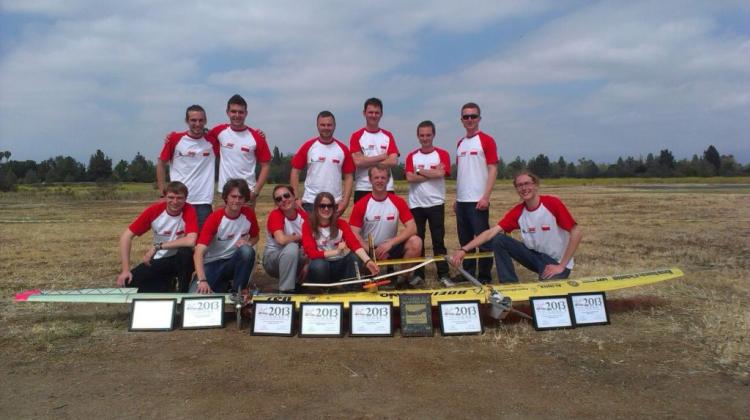 Unmanned aircrafts of the Student Interdisciplinary Scientific Club SAE won Aero Design West competition in California in three classes: Micro, Regular and Advanced. The team from Warsaw University of Technology was the first team in the history of the event to win gold in all classes.

Joanna Kwiatkowska from Warsaw University of Technology Promotion Office told PAP that in addition to three first places in the overall standings, students also won six other awards, which gave them a place on the podium in nine competitions.

The Aero Design competition, organized by the Society of Automotive Engineers (SAE), was held in Van Nuys, California, on 12 - 14 April. The competition is open for students of technical universities around the world. Teams build remote-controlled unmanned aircrafts, which are designed to lift the heaviest load. In each of the three classes, the way to succeed is different.

Aircrafts competing in the Micro class are small, usually powered by electric motors, sometimes by very small internal combustion engines. The task is to lift the heaviest load relative to the weight of the aircraft. In this class, students from Warsaw University of Technology not only won first place in the overall standings, but also first place for the largest share of the load in the total lift-off weight, and second place for technical presentation.

Regular class is a competition in which the objective is lifting the heaviest load. The consistency of calculations with the actual aircraft performance also significantly affects the final result. In addition to victory in overall standings, the Warsaw University of Technology team took the first place for the heaviest load lifted and the first place for technical documentation.

The Advanced class is for powerful flying machines, with a wingspan of over three meters, equipped with multiple engines. In this class, the team not only was best in the overall standings, but also won first place for the most accurate cargo drop and third place for technical presentation.

Students from the Student Interdisciplinary Scientific Club SAE have been competing in SAE Aero Design since 1991. "Our success would not be possible without a huge amount of work, experience and determination of students who devote all their free time and energy to developing our planes" - said Dariusz Chrzanowski, President of the Student Interdisciplinary Scientific Club SAE.

SAE (Society of Automotive Engineers) International is an organization of more than 90 thousand students, teachers, engineers, and manufacturers from nearly 100 countries, who share information and knowledge in the field of mobile systems engineering.