A new window into the world of attosecond phenomena 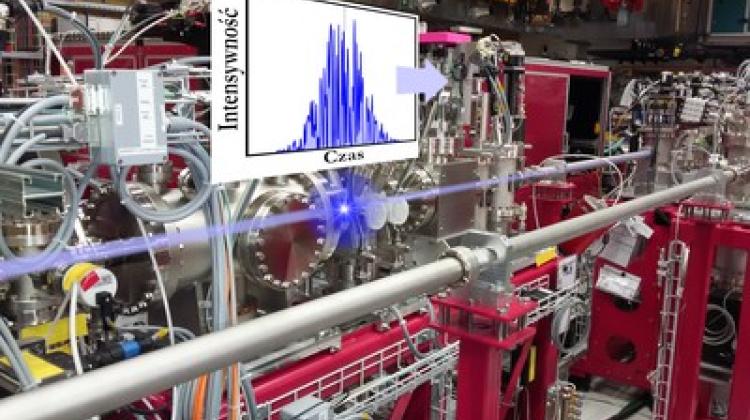 Attosecond phenomena can be studied with free electron lasers such as SwissFEL (the photo presents its research station Alvra). X-ray chronoscopy, which analyzes the shape of laser pulses before and after interaction with the sample, can potentially provide the most accurate image of these phenomena. (Source: IFJ PAN / Paul Scherrer Institut / SwissFEL Alvra)

They are everywhere, around us and within us. Phenomena lasting trillionths of a second form the core of chemistry and biology. It is only recently that we have begun to try to accurately record their actual course, with moderate success. However, physicists from Cracow have proven that the new window to the world of attophysics can be built, offering a very promising view.

Whether in the depths of a cell or inside a test tube, chemical reactions involving changes in the configuration of electrons in atoms and molecules occur with remarkable speed. Their prevalence and importance arouse the understandable curiosity of scientists, who have long tried to record their evolution in time. Current methods with the use of X-rays, developed so far for observing phenomena lasting attoseconds (i.e. trillionths of a second), face high demands on the parameters of the radiation beam used. The situation is likely to improve in the coming years thanks to a new method of measurement proposed by a group of scientists from the Institute of Nuclear Physics of the Polish Academy of Sciences (IFJ PAN) in Cracow.

Tracking the course of phenomena as fast as the bonding of atoms into molecules is now possible mainly thanks to X-Ray Free-Electron Lasers (XFEL). These devices, operating in only a few locations in the world due to their size and construction costs, generate ultra-short pulses of X-rays, lasting just a few femtoseconds (i.e. billiardths of a second).

Centres equipped with XFEL lasers use two basic measurement techniques known as X-ray spectroscopy and X-ray diffraction. The former focuses on analysing changes in the radiation spectrum during its interaction with the sample, while the latter studies how the X-rays scatter on the sample. Both methods have the same limitation: they do not allow us to 'see' processes shorter than the pulse duration. This is why the fastest phenomena so far observed at the European XFEL laser near Hamburg, for example, lasted 5 femtoseconds.

A few femtoseconds is not very long, but this is still not the world of attophysics. In order to get to this, we turned to chronoscopy, that is, a technique that analyses how pulses change their shape over time. We have shown theoretically that this method can be successfully used for ultrashort X-ray pulses to gain information about the changes in the shape of the pulses before and after interaction with the sample, says Dr. Wojciech Blachucki (IFJ PAN), first author of the paper in Applied Sciences.

In this publication it is shown that in the case of ultra-short laser pulses it is possible to measure their temporal structure, i.e., to obtain information about the pulse shape. This approach potentially makes it possible to infer phenomena from the world of attophysics even at the current state of technical development of XFELs. If the laser pulse were to last even 20 femtoseconds, but the information about its temporal structure could be reconstructed, say, in 100 points, it would be possible to notice phenomena occurring at a time of 20/100 = 1/5 femtosecond, i.e., 200 attoseconds.

It is important to note that at present, time resolution of less than one femtosecond could sometimes be achieved, but the intensity of the laser beam had to be significantly reduced. This procedure has powerful side effects. The time of irradiation of samples is lengthened to many hours, which in practice makes it impossible to carry out applied studies. X-ray chronoscopy does not have this limitation and removes the requirements for radiation pulses by using a sensitive method of measuring their temporal structure. After its implementation, current laser centres could dedicate part of their work time to attosecond measurements performed for external entities, for example, connected with industry.

However, it will be several years before X-ray chronoscopy becomes a standard research technique. The first step towards its implementation will be to demonstrate that the average durations of the laser pulse before and after interacting with the sample are different. This would be an experimental confirmation of the correctness of the method described by the Cracow-based physicists. Only at the next stage would the researchers focus on more precise reconstruction of time structure of impulses before and after contact with the sample.

The measurement technique we propose is not limited only to free-electron lasers, but is universal in nature. Thus, it can be successfully used also in the case of other sources generating ultra-short X-ray pulses, such as the Extreme Light Infrastructure facility located near Prague, emphasizes Dr. Jakub Szlachetko (IFJ PAN).

The research of the group from the IFJ PAN was supported by scientists from centres in Stockholm (KTH Royal Institute of Technology), Uppsala (Uppsala University), Villigen (Paul Scherrer Institute), Schenefeld (European XFEL GmbH) and Warsaw (Institute of Physical Chemistry of the Polish Academy of Sciences). The project was funded by a grant from the National Science Centre in Poland.