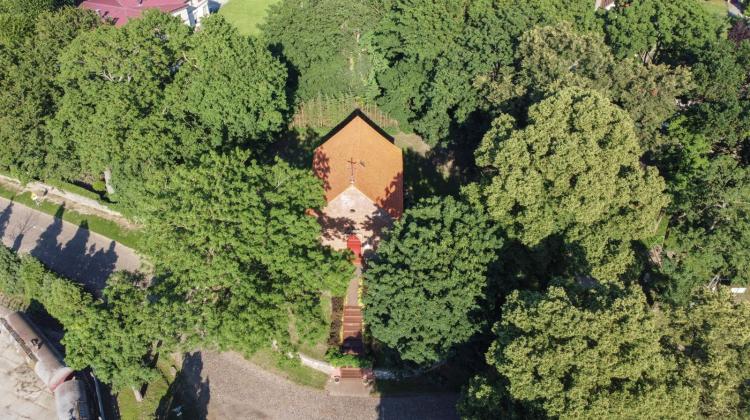 Claims that the grave of a viking king has been discovered in Poland with the help of satellite technology have been dismissed by a leading Warsaw archeologist.

Reports that the tomb of Harald Bluetooth, the 10th century king of Denmark and Norway, had been found in the village Wiejkowo made international headlines after being published on academia.edu by independent viking historian Marek Kryda.

He added that the mound was an anomaly visible in the LiDAR (laser scanning) satellite image - the elevation of the area, on which the church in Wiejkowo currently stands.

Now Dr. Wojciech Filipowiak from the Institute of Archeology and Ethnology of the Polish Academy of Sciences has told PAP that the findings have not been peer-reviewed and can only be described as an ‘opinion'.

He said: “The ‘discovery’ is based on LiDAR scanning and the terrain form it shows. It should be emphasized here that, contrary to some media reports, LiDAR does not scan below the ground surface. Secondly, the mound identified in Wiejkowo would not be anything unusual, were it not for the fact that the author considered the story of the discovery of the Curmsun Disc to be true.”

The Curmsun Disc is a gold plate with a diameter of approx. 4.5 cm. It is an alleged posthumous gift to the Viking king: on its obverse there is a Latin inscription indicating Harald, son of Gorm, king of 'Danes, Skansians, inhabitants of Wolin (Jomsborg) and the city of Aldinburg' (the inscription reads: +ARALD CVRMSVN+ REX AD TANER+SCON+JVMN+CIV ALDIN+).

The Curmsun Disc became famous in 2014, when an 11-year-old Swedish student of Polish origin showed the disc to her history teacher and explained that it was a family heirloom.

According to Dr. Filipowiak, the complicated history of the disc is crucial for the theories concerning Harald Bluetooth and Wiejkowo.

He said: “It is extremely difficult to follow. Reports about the disc come from Tomasz Sielski, a Polish emigrant living in Sweden (his family owns the disc) and Swedish archaeologist Sven Rosborn. The problem is that the information they have provided about the Curmsun Disc varies depending on where it is published.”

He explained that the disc was allegedly found between 1840-42 during the reconstruction of the church in Wiejkowo either under the temple floor, in the crypt, cellar or in Harald's alleged grave.

In 1945, the Sielski family came into its possession. The versions of how this happened are also inconsistent. According to Sielski and Rosborn, it was a voluntary payment for three brothers, Polish soldiers, for helping the local population, or the disc was stolen from the church crypt.

Recently, Dr. Filipowiak reported, there were reports that the Sielski family allegedly was in possession of a lost written source, which - if true - would not only indicate the Viking origin of the crypt under the church in Wiejkowo, but would also explain many issues from the history of the territories of present-day Poland and Denmark.

Curmsun Disc itself was considered a counterfeit, among others, by numismatist Dr. Mateusz Bogucki, a professor at the Institute of Archeology and Ethnology PAS, who pointed out that in his opinion the disc was 'a product made by antiquity enthusiasts' from the 18th and 19th centuries and an object that could be found in the cabinet of peculiarities of contemporary history enthusiasts.

Dr. Filipowiak emphasized that the discoverers were responsible for 'proving that both the written source they cited and the Curmsun Disc were original', and so far, despite many publications, they have not done so.

He said: “It can be objectively stated that both the disc and the written source, as well as the circumstances of its discovery, are completely unreliable and one should not draw conclusions about Jomsborg, Wolin or Harald Bluetooth on their basis.”

When asked if there was any chance that the hill in Wiejkowo was indeed the burial place of Harald Bluetooth, he replied that “there is always a chance, but personally I would not bet any money on it.”

He continued: “First of all, one should challenge the message of Adam of Bremen, who in the 11th century wrote in his chronicle Gesta Hammaburgensis ecclesiae pontificum (Deeds of Bishops of the Hamburg Church) that Harald, after losing the battle with his son, came to Jomsborg and died there, but was buried in Roskilde. Of course, there are researchers, who question this record.”

He added that it would be possible to carry out research on the mound where the church now stands, “just as you can study any interesting elevation in the area, and there are a lot of those near Wolin.

“The church hill in Wiejkowo may be a natural hill, only shaped over the years, for example by walls that surrounded the church. The current church may have been built on the ruins of an earlier church.

“Or it may also be a former burial mound - for example a Slavic one. This, of course, is guesswork. In my opinion, this is not the most interesting place to search for Harald. The chances of discovering objects related to the Danes and Harald Bluetooth are greatest in the ongoing archaeological research related to the construction of S3 in Wolin. There, perhaps, lies the key to solving the riddle of the king of Denmark.”

Harald Bluetooth (Danish: Harald Blåtand), son of Gorm the Old and Tyra Dannebod, father of Sweyn Forkbeard, ruled as king of Denmark from c. 958 to c. 986 and a king of Norway in the 970s. He was baptized in 965 and introduced Christianity to Denmark. According to one hypothesis, the nickname Bluetooth comes from the king's bad tooth (damaged during one of the battles) that appeared 'blue'. The nickname was probably not used during Harald's lifetime. The Bluetooth wireless technology was named after the king. (PAP)