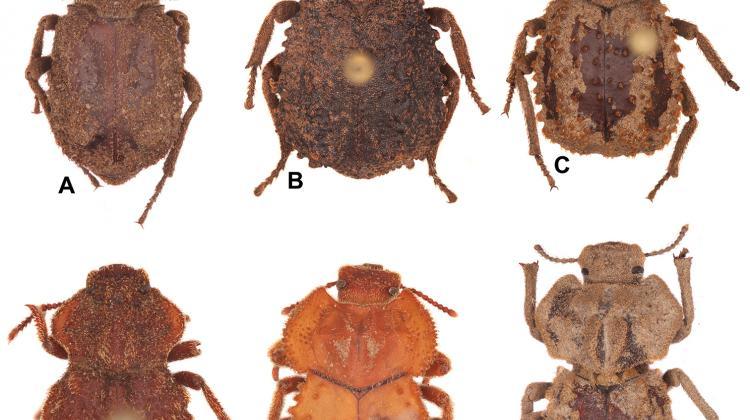 A newly-identified species of beetle has been named after Polish mathematicians following their discovery in a museum where they had been lying for decades.

The wingless beetles from South Africa measuring between 7-15mm long were originally caught in the Savannah in the 20th century.

But they were left unnamed and over time became forgotten about until Dr. Marcin Kamiński from Purdue University and the Museum and Institute of Zoology of the Polish Academy of Sciences and his colleagues came across them while working at the Natural History Museum in Pretoria, South Africa.

Now, thanks to DNA testing, the researchers have been able to classify the beetles.

In recognition of the ‘mathematics’ behind the classification, they decided to name the beetles Machleida tarskii and Machleida banachi in honour of mathematicians Alfred Tarski and Stefan Banach.

Alfred Tarski (1901–1983), was a logician and mathematician. He contributed to the development of mathematical logic and logical semantics; he formulated logically correct definition of truth. He was a member of the Lviv-Warsaw school of logic. Just before the outbreak of World War II, he emigrated to the United States.

Kaminski said that museums around the world have huge, non-described zoological and botanical specimens, often collected by generations of researchers during historical expeditions.

The development of DNA knowledge and new technological capabilities now enable researchers to accurately identify specimens found years ago and "embed" them taxonomically.

DNA samples are taken from individual beetles and following a complicated statistical methods, similarities and differences between them are analysed.

Kaminski said: ”Methods of establishing kinship were invented by mathematicians creatively having fun. One of them was Stanisław Ulam. He wrote "Mathematics in biology", where, among other things, a phylogenetic tree appears. It is thanks to him that we - taxonomists - can now do what we do.

"We hope that the names we introduced will remain valid for hundreds of years. In this way, we celebrate the National Year of Mathematics," he told PAP.

Earlier this year, Dr. Kamiński published another paper, in which he described an entire genus of clams, giving it the name Ulamus in honour of Stanisław Ulam (1909-1984). Ulam was a member of the Lviv mathematics school, was the creator of the Monte Carlo method of computation. It is still used worldwide for mathematical modelling of complex processes.

Taxonomy is a branch of science that classifies and describes different species of organisms. Dr. Kamiński focuses on the relationships between various species of desert beetles. According to the researcher, every fourth species on Earth is a beetle. His group specializes in the study of darkling beetles (Tenebrionidae), represented by 20,000 species.