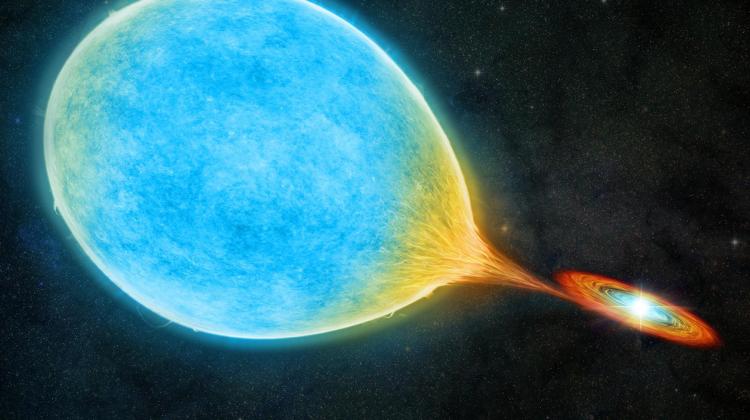 An International team of astronomers has discovered an unusual pair of stars, the properties of which confirm the decades-old theory of evolution of cataclysmic variables.

About half of the stars in our galaxy are gravitationally associated with others, forming binary or multiple systems. Their typical orbital periods are from several hours to hundreds of years. Some of them are so close to each other that they would easily fit between Earth and Moon, with orbital periods of only a dozen minutes.

But the origin of these objects with extremely short periods has so far been a mystery.

Now, the scientists which include Dr. Przemysław Mróz from the Astronomical Observatory of the University of Warsaw has published a paper in Nature describing the discovery of a binary system of stars orbiting each other with a period of just 51 minutes.

The system belongs to a rare group of stars, called cataclysmic variables, in which a star similar to the Sun orbits a white dwarf - a hot and dense object formed as a result of the evolution of a medium-massive star.

In cataclysmic variables, the material from the secondary object flows onto the surface of the white dwarf primary. During this process, a large amount of energy is released, causing irregular, violent brightening of the system, which used to be believed to be caused by unknown 'cataclysms'.

In a press release, the astronomers said: “The newly discovered system ZTF J1813+4251 is a cataclysmic variable system with the shortest known orbital period of only 51 minutes. The orbit of the stars is arranged in such a way that for the observer of Earth, they obscure each other at regular intervals. This makes it possible to precisely measure the parameters of both stars - their sizes and masses.”

Simulations carried out by scientists show that the system is currently in transition: the larger star loses matter and in a dozen million years it will be completely stripped of its hydrogen-rich atmosphere. Only a dense helium core will remain. The distance between the stars and their orbital period is getting smaller. In about 70 million years, they should orbit each other with a period of just 18 minutes, and then the distance between them will start to increase.

The astronomers added that although researchers predicted that such cataclysmic variables should transition to ultrashort orbits, “this is the first time such a transitioning system has been observed directly.”

The system was discovered in data collected by the Zwicky Transient Facility (ZTF) sky survey carried out with Samuel Oschin telescope at Caltech's Palomar Observatory. Dr. Przemysław Mróz was responsible for brightness measurements of over a billion stars observed by ZTF, leading to the discovery of ZTF J1813+4251.